The Workshop on the use of NGS technologies for plant pest diagnostics was organized jointly by the European Cooperation in Science and Technology (COST) Action FA1407, the European Phytosanitary Research Coordination network (Euphresco) and the European and Mediterranean Plant Protection Organization (EPPO) and took place on 2017-11-22/23 in Bari, Italy.

Participation to the Workshop was open to all interested parties and was attended by 147 participants from 45 countries including 12 countries which are not EPPO Member countries. It should be noted that the interest for this workshop went beyond the expectations of the organizers and that the Organising Committee finally decided to allow more participants than originally scheduled. 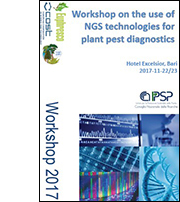 High-throughput sequencing technologies, namely Next Generation Sequencing (NGS), have open the way to fast and cheap analysis of genomes. NGS technologies have the potential to be routinely used for plant pest diagnostics in the near future. NGS technologies can be used for the detection of known pests as well as 'unknowns'. These technologies can, at the same time, increase knowledge on pest diversity (e.g. genomics, population biology, epidemiology). The Workshop provided basic information on these technologies and about their most recent advances and gave the opportunity to discuss, for the first time, its applicability for plant pest diagnostics. The target audience of this workshop was current and potential users of NGS with a focus on application in plant health as well as plant health risk regulators. 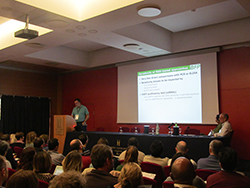 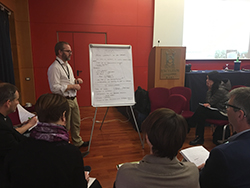 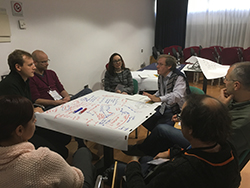 Presentations made during the plenary sessions

During the morning of the second day, 3 parallel hands-on sessions were organized. The topics of these sessions had been identified by the Organizing Committee and were related to the expertise declared when participants registered.

Session on 'harmonized guidelines on the use of NGS in diagnostics'

The final session on 'harmonized guidelines on the use of NGS in diagnostics' was introduced with a presentation of a framework for the evaluation of biosecurity, commercial, regulatory, and scientific impacts of plant viruses and viroids identified by NGS technologies (COST Action FA1407)

After a presentation of the EPPO Standard setting process

, six parallel brainstorming sessions were organised to determine the main scope and content of a possible EPPO Standard that would address the needs of laboratories. 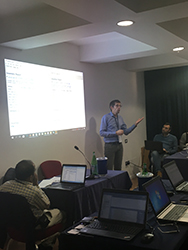 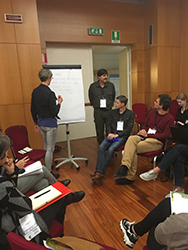 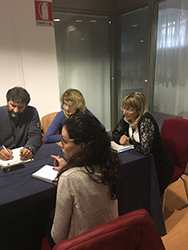 The main conclusions of the brainstorming sessions and of the workshop are presented below.

Group 1 agreed that a technical document was needed that would describe best practices for sampling (e.g. conditions for sample shipment, use of gloves and disposable material for each sample, sample storage), library preparation (e.g. addition of spikes, how to minimise cross-contamination and pipetting mistakes), sequencing (e.g. how to minimise carry-over between runs, track and trace samples throughout the sequencing step), bioinformatic analysis (e.g. quality assurance of data), validation (e.g. regular validation of the pipeline) and reporting (e.g. confirm the outcome of the NGS-based analysis with another test). Guidelines that cover the regulatory aspects of NGS would also be needed.

Group 2 supported the idea of developing a set of recommendations, that could be included in the EPPO Standard PM 7/98 (2) Specific requirements for laboratories preparing accreditation for a plant pest diagnostic activity. They noted that NGS required a RNA of higher quality compared to PCR tests and protocols must be adapted to take into account the matrix, the virus, the season. Library preparation could be outsourced, commercial kits could be used upon verification and home-made procedure should be validated. Communication with providers of sequencing services is essential to agree on the controls to use or to get information on previous runs (potential carry-over). The group highlighted the difficulty of validating analysis on unknows and recommended that new findings are accompanied by a pest risk assessment.

Group 3 was in favour of developing general and technical recommendations for scientists but also for regulators. Sampling recommendations would be host-specific; different tissues should be taken to get a representative sample. The type of plant analysed will also determine the requirements in terms of quality of RNAs. The use of controls/spikes (synthetic vs biological) will be useful for library preparation and the subsequent bioinformatic analysis. The bioinformatic pipeline should be tested with standard data. Concerning validation, the group supported the idea of using/adapting approaches used in other disciplines (i.e. medical sector). The reporting should allow an independent laboratory to follow what was done.

Group 4 considered that one Standard would be more appropriate as an early attempt to standardize NGS activities. For this group, the sampling for NGS would not be different from the sampling done for other tests (i.e. real-time PCR). Composite samples should be used when dealing with multiple targets. Negative controls should be included during the library preparation. Validation of the NGS pipeline may be possible with a known pest but is not feasible with unknowns. Results should be confirmed by another test.

Group 5 also concluded that sampling for NGS will be similar to what done for other tests. They discussed the use of sample preparation using fresh or frozen plant material and the importance of having best practices to prevent contamination.

Group 6 reached the same conclusions as the other groups. They were in favour of guidelines that should be specific for each application of NGS technologies. Standard on sampling already exist; NGS will need additional (positive and negative) controls. The group agreed that library preparation was platform-dependent and a fast-moving area, standardization will then be difficult. Equivalence of in-house methods and commercial kits should be proved. Basic QC minimum criteria that are platform independent should be established; concerning bioinformatics, recommendation should not be too specific/prescriptive, to leave freedom to the operator.

As a result of the brainstorming sessions, it was concluded that two documents should be prepared.

The EPPO Secretariat would like to express its gratitude to the Organizing Committee, the trainers and the local organizers for their support in the organization and running of the Workshop. 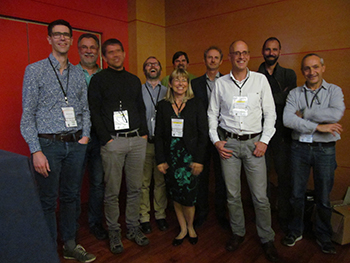 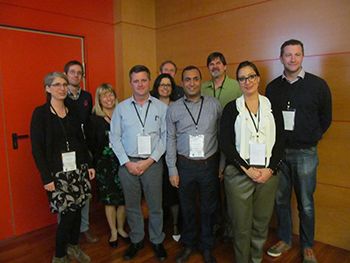 And finally, we would like to thank all participants for having contributed to this successful event.