What are the EPPO codes?

To be informed about the main modifications that are made to the coding system  (new codes and deactivated codes):

The development of this coding system was initiated by BAYER in the 1970s. In 1996, BAYER transferred to EPPO the maintenance and development of the coding system. During the 1990s/2000s, EPPO developed a dedicated interface in order to facilitate access to the codes and their associated names, which was called the EPPO Plant Protection Thesaurus (EPPT). In 2007, it was agreed to rename BAYER codes as EPPO codes. In 2014, a new web-based database (EPPO Global Database) was launched to replace EPPT. 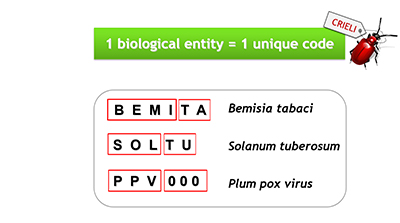 How EPPO codes are constructed?

EPPO codes are constructed with combinations of 5 to 6 letters and, whenever possible, codes are mnemonic abbreviations of the scientific name of the organism.

EPPO codes are provided for the main steps of the taxonomic tree and coding has been harmonized for each level (e.g. all codes for families starts with 1 and ends with F). In addition, parent/child relationships have been created between each taxonomic level.

How taxonomic changes are managed?

When for taxonomic reasons a scientific name is changed, the EPPO code remains the same.

EPPO codes have been created for more than 94 500 species (as of May 2022) that are important in agriculture and plant protection. Every year, many new codes are created (on average 4000 new codes) and revisions are made to names or taxonomic elements. In addition to taxa, the database also contains a smaller set of codes describing non-taxonomic entities that are of interest to those working in the field of plant protection products (e.g. crop groups, targets, treatments).

For each organism, the database provides:

How to download and use the EPPO codes into other IT systems?

EPPO codes are now freely available under the terms of an open data licence. New web services are being developed to facilitate the downloading of EPPO codes so that they can be used in other IT systems. Computer files (in different formats), the open data licence, and more explanations can be found in the EPPO Data Services platform.

How to request new EPPO codes to be created?

The EPPO Secretariat continues to create new codes and this service is still subject to fees. Prices, modes of payment and all other necessary tools to request new codes for taxa that are not yet included in the coding system are available via EPPO Global Database (download a practical guide

For non-taxonomic entities (e.g. crop groups, pest groups) that are of particular interest to the plant protection products sector, it has been agreed that new codes will be created under the supervision of the EPPO Panel on harmonization of data on plant protection products and EPPO codes. Requests concerning non-taxonomic entities can be sent to the EPPO Secretariat by email (hq@eppo.int).