In order to facilitate communication among National Plant Protection Organizations and other stakeholders involved in the registration of plant protection products, EPPO has developed a harmonized classification of plant protection uses and its associated computer coding system. This is of particular relevance to registration authorities operating in the framework of the mutual recognition and zonal assessment called for in EU Regulation

In the harmonized classification, the following six elements have been retained to describe the use of a plant protection product:

It is recognized that other elements (not covered by the EPPO Standard PP 1/248) can additionally be used to characterize the use of a plant protection product (e.g. growth stage of the crop, formulation type, pest life stage), and therefore information systems should allow the possibly to include further specifications. It should be noted that these other specifications are not coded for in the EPPO system.

A use should be described by a combination of elements

One of the main principles in this harmonized classification is that a plant protection product use should be described by a combination of elements and their associated EPPO Codes. In order to help users in choosing the appropriate terms, some explanations may be found in a note field in the EPPO Global Database.

How to find the EPPO classification in the EPPO Global Database?

To view the different elements (and their associated Codes) which can be used to characterize the use of plant production products, click here: https://gd.eppo.int/taxon/ 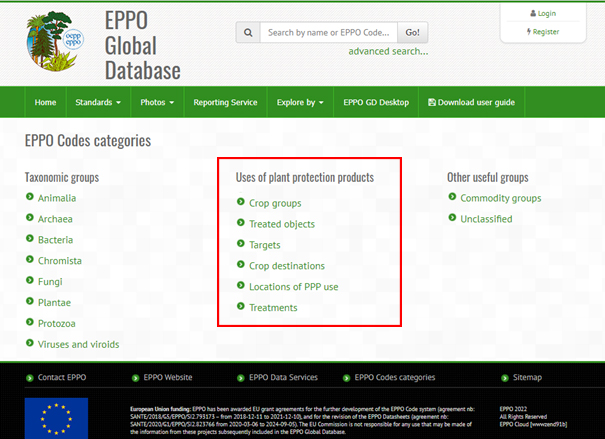 For an alternative visualization of the classification (tree view), in the top green bar menu choose ‘Explore by’, then ‘PPP use classification’, and finally click on ‘View the expanded list’ 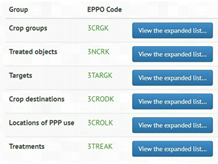 How is the harmonized classification being maintained?

This classification was developed by the EPPO Expert Working Group on the Harmonization of Data on Plant Protection Products and first published in 2020. This classification is an evolving one, and if new terms to describe plant protection product uses are considered necessary, they can be proposed to the EPPO Secretariat with supporting explanations and the Expert Working Group will consider such proposals.

In this classification, two different types of Codes are being used:

Two elements (crop groups and targets) of the classification use both types of Codes. All other elements (treated objects, crop destinations, locations of plant protection product use, treatments) use only ‘non-taxonomic’ Codes.

For most crops, Codes associated with plant species or genera (‘taxonomic Codes’) can be used. For example, SOLTU for potato (Solanum tuberosum) or SECCE for rye (Secale cereale). As a general remark, when the crop concerned corresponds to several species within the same genus, it is advised to use the genus Code, e.g. 1ABIG for Abies. Codes describing a single (unknown or unspecified) species, e.g. ABISS Abies sp., are not recommended in this context.

For targeted pests, it has been considered that they could simply be described by their taxonomic Codes (i.e. species, genera or even families), and that due to the significant variation in fauna and flora among countries within the EPPO region it was not possible to list species that belong to a pest group (i.e. it is difficult to envisage how to establish common lists of species to be included in pest groups such as whiteflies or powdery mildews?).

For weed groups and effects of plant growth regulators, several categories and their associated ‘non-taxonomic’ Codes were specifically developed. For the same reasons as above, it was not possible to produce harmonized lists of plant species to include in the different weed categories. 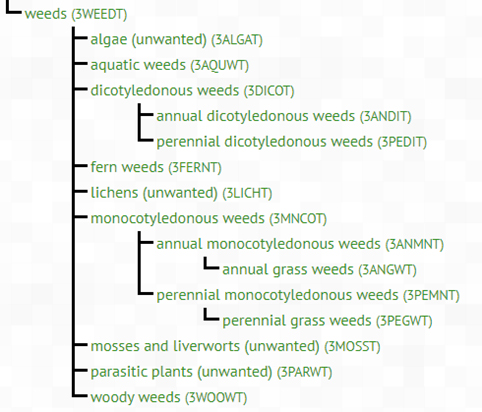 All new non-taxonomic Codes used in the harmonized classification start with number ‘3’ and end with a specific letter according to the different elements:

It is to be noted that a number of historical ‘non-taxonomic’ Codes are still available in the system. The historical Codes are the ‘non-taxonomic’ Codes (such as NNNGG for cereals, NNNAA for spice plants, NNNZZ for ornamentals). They are also included in the EPPO Global Database but under a distinct section (‘Unclassified’). This clear separation from the EPPO classification (as described in the Standard) provides IT specialists with an easy way to exclude this set of historical Codes from their own IT systems, if appropriate, while the historical Codes remain available for those users who still need them.