The Panel considered the conclusions and recommendations of the Joint EPPO/COST-SMARTER Workshop on the Evaluation and Regulation of the use of Biological Control Agents in the EPPO Region (Budapest, 2015-11-23/25) and the possibilities that EPPO has to promote the use of biological control agents (BCAs) as a phytosanitary measure against regulated pests and generally in plant protection. The Panel focuses on BCAs which are macroorganisms (including nematodes) since the use of microorganisms for plant protection is covered by pesticide regulations. At the same time, the Panel recognised that microorganisms used as classical BCAs are not covered by of pesticide regulations. This issue should be considered further taking into consideration that the current expertise of the Panel does not include the use of microorganisms. 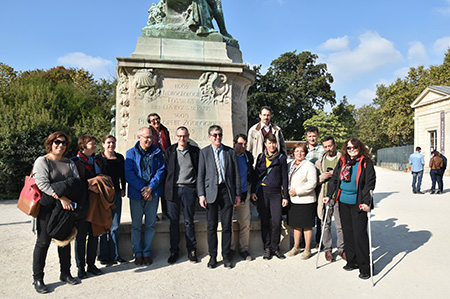 The Panel discussed the terminology currently used in biological plant protection and noted difficulties in defining ‘microorganisms’ and ‘macroorganisms’ (which can sound the same when spoken), ‘indigenous’ and ‘non-indigenous’, ‘spread’ and ‘dispersal’, etc.

The Panel considered the draft document on the information requirements for a BCA to support the decision on its addition on the EPPO ‘Positive List’ (first two tables of the EPPO Standard PM 6/3). The draft concerning the augmentatively used BCAs, prepared by a small group of experts was corrected, amended and edited by the Panel and will be published on the EPPO website (after its adoption by the EPPO Working Party on Phytosanitary Regulations) for the use of person making applications for BCA additions to the EPPO ‘Positive list’. A group of experts volunteered to prepare an equivalent document for classical BCAs.

The Panel discussed the applications for the addition of Amblydromalus limonicus and Typhlodromips montdorensis to the EPPO ‘Positive list’ and approved both of them since the criteria of the EPPO Standard PM 6/3 were fully met. No deletions from the 'Positive list' were proposed.

The two drafts of the EPPO Decision-support scheme (DSS) for import and release of BCAs were discussed by the Panel:
- the document based on the EPPO Standard PM 5/3 (Guidelines on Pest Risk Analysis: Decision-support scheme for quarantine pests) drafted by the EPPO Secretariat and partly edited by the Panel at the previous meeting, and
- the document drafted by a small group of experts as a ‘basic part of the DSS’.
The Panel corrected and edited both documents and came to consensus that, after additional editing, the second document should become the first part of the DSS as an ‘Express-DSS’ with three possible outcomes for the assessed BCA: (1) ‘allowed for release’, (2) ‘prohibited to release’ and (3) ‘full assessment is needed’ in which case the document drafted by the EPPO Secretariat should be used as the second part of the DSS. The edited DSS should be presented to the EPPO Working Party on Phytosanitary Regulations for consideration.

The Panel considered the draft questionnaire to EPPO countries adopted by the EPPO Council on regulation of BCA releases and slightly edited it. In the covering letter the responsible person in a country will be informed that the copy of the questionnaire is sent to the corresponding Panel member.

The Terms of Reference of the Panel and the parts of the EPPO Work Program concerning the use of BCAs were also discussed at the meeting as well as possible biocontrol issues in the framework of Euphresco and minor uses studies.