8th Meeting of the EPPO Panel on Diagnostics in Entomology

The EPPO Panel on Diagnostics in Entomology was hosted by the Slovenian Forestry Institute in Ljubljana, Slovenia. 14 Panel members and 2 observers attended the meeting. 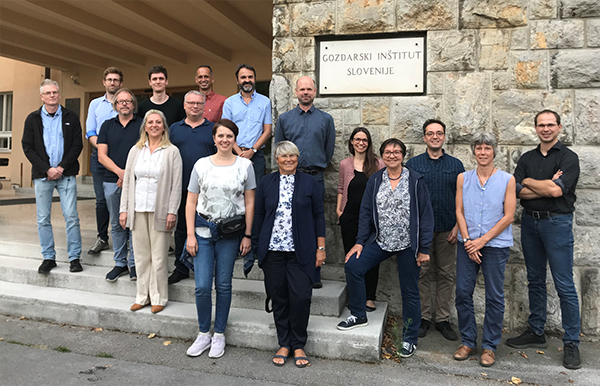 During the meeting, the Panel reviewed 4 revised Diagnostic Protocols.

A draft revision was prepared by experts from AGES (AT) and ANSES (FR) to align the text with the B. latifrons diagnostic protocol and with recent instructions to authors, to update the section on morphological identification following the validation study performed by the EURL, and to add a real-time PCR test for identification. The Panel reviewed the main text and the appendices of the draft revision. A new version of the draft revision that takes into account the discussion of the Panel will be prepared by the EPPO Secretariat and sent for country consultation.

Comments were made by an expert from INRAE (FR) during the revision of the EPPO datasheet. The Panel reviewed those comments as well as the main text of the Diagnostic Protocol. A drafting team composed of experts from MOAG (IL), ILVO (BE) and VAAD (LV) was formed and will prepare a draft revision of the diagnostic protocol.

Following experience gained by the EURL during their validation study and the publication of Taddei et al., 2020, additions and corrections were proposed by the Steward (ANSES, FR). The proposed changes were reviewed by the Panel. The EPPO Secretariat will prepare a corrigendum for publication in the EPPO Bulletin.

The EPPO Secretariat updated the Panel on the progress made on PM 7/013 Trogoderma granarium. The EPPO Secretariat will prepare a corrigendum for the key. The Panel also discussed the harmonization of the fruit fly diagnostic protocols and the preparation of a general key for the identification of fruit flies. Expert working groups were formed and the work will start in 2023.

During the meeting, the Panel reviewed three new Diagnostic Protocols.

A draft protocol was prepared by experts from INRAE (FR) and ANSES (FR). The Panel reviewed the main text, the appendices and the flow diagram of the draft Diagnostic Protocol. A new version that takes into account the discussion of the Panel will be prepared by the EPPO Secretariat and the drafting team. The draft protocol will be sent for country consultation after approval of the Panel.

A draft protocol was prepared by an expert from Fera (GB). The Panel agreed that the protocol should target the Euwallacea fornicatus complex, and that simplified keys at subfamily, tribe and genus level should be included in the diagnostic protocol. Finally, because of the different potential impacts of the different species within the complex, it was decided to describe the molecular tests available to differentiate them. A drafting team composed of experts from GB and NL was formed and will further work on the draft document.

Updates were provided on the following Diagnostic Protocols:

The revision of the Diagnostic protocol PM 7/052 Diaphorina citri and the drafting of a new protocol on Rhagoletis pomonella will start in 2023.

A presentation was made on EFSA activities on pest surveillance and the data needed to optimize the design of surveys (in particular data on diagnostic sensitivity). It was agreed that EPPO and EFSA would continue to collaborate on this topic and involve EPPO Panels.

The work of CREA (IT) on Aclees taiwanensis, a pest of Ficus carica, was presented and alert was given on the potential impact of this pest in the Mediterranean region.

The next meeting of the Panel on Diagnostics in Entomology will be held in Autumn 2024.

The composition of the EPPO Panel on Diagnostics in Entomology can be found on the EPPO website.