4th Meeting of the EPPO Panel on Diagnostics in Mycology

The Panel on Diagnostics in Mycology met on 2020-04-22/24 by teleconference due to the COVID-19 pandemic. Eighteen Panel members and five observers attended the meeting. It had originally been planned to hold the meeting at ANSES, France and Mr Ioos was thanked for the work he had put into organizing the meeting there. Not all points on the original agenda (for the face to face meeting planned) were covered due to the number of topics and the constraints of holding the meeting via teleconference. 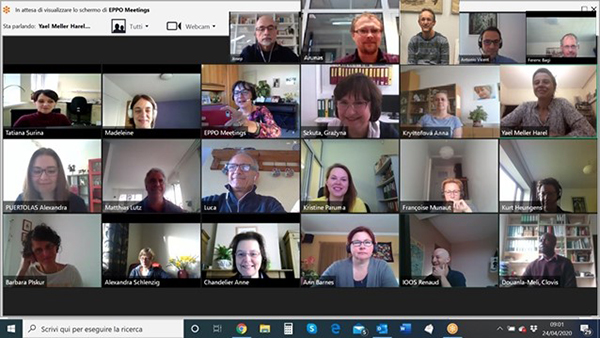 Work is in progress on the revision of the following protocols:

The version presented to the Panel followed country consultation and the Panel went through all the comments received. It was agreed that the final version with the modifications agreed during the meeting, after adding and checking information on colony characteristics, can be sent for the final approval (formal objection) stage.

The lead author presented a draft revision which included the addition of molecular tests, new pictures, and updates to the other parts. An expert working group will be formed to review this further with the aim to circulate a new version to the Panel later in the year.

The lead authors presented this revision which is an alignment with the IPPC protocol, but needs additional work due to for example the change in regulation which now covers non-European isolates (which therefore need to be able to be identified). Once information is received from the EURL on Mycology (on validation of new tests which will detect these isolates) this will be finalised and sent for country consultation after review by the Panel.

The lead author explained that in the last year experts in Fera have been performing validation of molecular tests for this pest which have been added to the protocol. The Panel went through the revised protocol. A drafting team will finalize the revision of the protocol. The text will be sent to the Panel before being sent for country consultation.

The lead author presented the early stages of a draft revision to the Panel. A drafting team was formed to progress further on this protocol.

This protocol had been sent for country consultation in 2018. However, since then it was realised that a major revision is required. In the past, 2 regulated species were covered by the protocol, namely M. medusae f. sp. deltoidae (present in the Europe) and Melampsora medusae f. sp. tremuloides (absent from Europe) and there is a need to distinguish the two species as both are not always regulated (e.g. the EU only regulates the species absent from Europe). The Panel agreed that M. medusae f. sp. deltoidae is a clear risk and the protocol needs also to be able to identify this pest. Melampsora medusae is still on the EPPO List of pests recommended for regulation and both pests need to be kept in the protocol. The lead author presented a detailed analysis of the tests and taxa and a review group was agreed to work with the lead author to prepare the final version for review by the Panel and then country consultation.

A draft revision will be prepared for the next meeting.

A new author was found for these 2 protocols and draft revisions will be prepared for the next meeting.