12th Meeting of the Panel on Diagnostics in Nematology 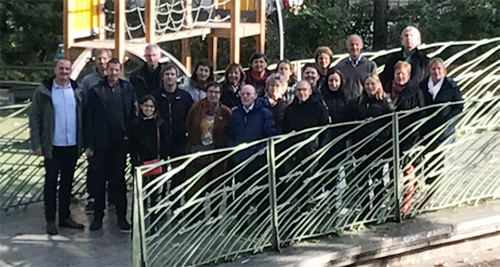 The Panel reviewed one new protocol and several protocols for which revision is in progress (see below). They also made plans for a new protocol on Meloidogyne graminicola.

A draft of this new protocol was reviewed by the Panel. Some changes (such as addition of extra figures) and additional tasks (summarizing the most important features of the species, investigation of sequences available) were agreed upon. It is planned that this protocol will be sent for country consultation in early 2020.

A preliminary document was prepared by the EPPO Secretariat compiling information gathered from the workshop on the maintenance of nematode collection (2017). This information included Standard Operating Procedures (SOPs) received after the workshop and outcomes from different projects (Q-Collect project, Euphresco project ‘Cyst and Melo Collect’). The Panel reviewed the document and agreed on the content of the document. A small expert working group (EWG) was created to continue the work on this document.

A revision of this Standard was presented. A new real-time PCR test has been added. It is planned that this revised protocol will be sent for country consultation in early 2020 when the table ‘Morphological and morphometric characters useful for identification of Globodera species’ is finalized.

This protocol was updated to include new species which have been described. Some further changes are required as the new EU regulation which entered into force on the 14th of December (Commission Implementing Regulation (EU) 2019/2072) will exclude Five Hirschmanniella spp. (H. behningi, H. gracilis, H. halophila, H. loofi and H. zostericola). Descriptions of all 5 species are now required and all the molecular tests need to be checked to see which species are targeted. Once this is done the protocol will be sent for country consultation.

A revision of this Standard is underway to add information on extraction from insect vectors and a LAMP test (also included in the IPPC protocol on this pest). It is planned that this revised protocol will be sent for country consultation in the first half of 2020. Information from Test Performance Studies performed in the framework of the EU funded Project  VALITEST

will be included in the Standard.

will be enriched with the new terms used in the diagnostic protocol of Longidorus diadecturus. A list of Euphresco

projects was presented to the Panel. The ongoing Euphresco Project ‘Global warming and distribution of root-knot nematode (RKN) species of the tropical group (MeloTrop)’ was presented.

project, information on the Database on Diagnostic Expertise

was presented to the Panel

The Panel exchanged information on emerging pests and the situation in their countries. This included presentations on:

A presentation was given on the scope and objectives of the European Union Reference Laboratory (EURL) for plant pests nematodes and activities planned in the next year.

It will be investigated if it is possible to hold the next meeting in Croatia in early February 2021.