22nd Meeting of the EPPO Panel on Diagnostics in Bacteriology

The 22nd meeting of the EPPO Panel on Diagnostics in Bacteriology took place in Gent (BE) at the kind invitation of the Institute for Agricultural and Fisheries Research (ILVO). The EPPO Secretariat was pleased to welcome new experts from the Czech Republic and Spain. The Panel continued its task of developing Diagnostic Protocols for regulated bacteria. 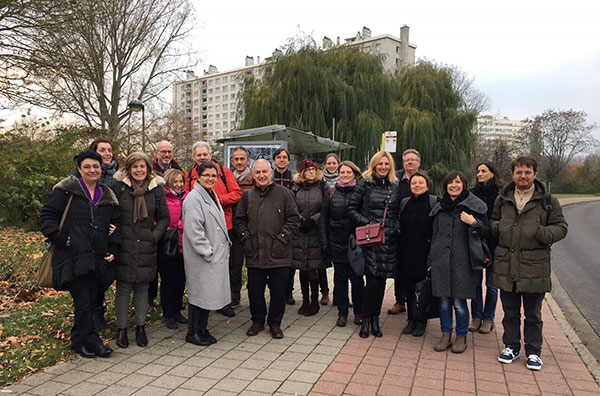 As it is important to maintain links with other regional initiatives that are relevant to EPPO Diagnostic activities, the EPPO Secretariat invited Ms Costa, leader of WP 1 (diagnostics) of the COST Action EuroXanth, to present the activities conducted. Researchers involved in EuroXanth provided suggestions for revision on several EPPO Diagnostic Protocols and have volunteered to be involved in the preparation of the revisions.

The Panel discussed the comments received from EPPO Member Countries on the new pest-specific Diagnostic Protocol on ‘Candidatus Liberibacter solanacearum’. Information resulting from the H2020 EU project ‘Pest organisms threatening Europe (POnTE)’ has been included, in particular the validation data generated during a test performance study performed in the framework of the project. This EPPO Diagnostic Protocol is consistent with the IPPC Diagnostic Protocol for the same pest (ISPM 27 Annex 21). The EPPO Diagnostic Protocol will be finalised in early 2019 and sent for the final approval stage.

An Expert Working Group met after the Panel meeting and prepared a revised version of the Diagnostic Protocol. The objective of the revision was to include newly developed molecular tests, evaluated in the framework of the Euphresco project ‘Interlaboratory tests for the detection of Clavibacter michiganensis subsp. sepedonicus (potato ring rot) and Ralstonia solanacearum (Potato brown rot)’ and an interlaboratory comparison organized by the Institute for Agricultural and Fisheries Research (ILVO) and the Dutch General Inspection Service (NAK). The diagnostic approach was also aligned with the one in the newly adopted Diagnostic Protocol PM 7/21(2) on Ralstonia solanacearum species complex. The document will be finalized and sent for country consultation in early 2019.

A fourth version of the Diagnostic Protocol is in preparation. The Panel discussed how to present the validation data for the combinations of EU priority hosts/matrices in a concise manner. New molecular tests will be described, and the list of current tests will be reviewed to decide on those that should be maintained. Information from the H2020 EU funded projects ‘Pest organisms threatening Europe (POnTE)’ and ‘Xylella fastidiosa Active Containment Through a multidisciplinary-Oriented Research (XF-ACTORS)’ on laboratory samples (in particular the pooling of samples from asymptomatic plants) will be included. The revision will be finalized by early February 2019 and the document sent for country consultation.

The Panel reviewed the draft Diagnostic Protocol prepared by a group of experts from the Panel. The Appendices describing the molecular tests will be finalised, and the revised document should be sent for country consultation in February 2019.

The Panel reviewed the list of EPPO Diagnostic Protocols in Bacteriology to confirm stewards, agree on priorities and plan future work.

The following proposals for revision were made:

An update of the projects relevant to bacteriology that were funded through Euphresco since 2015 was presented. The research topics identified for transnational collaboration in 2018 were also discussed.

The Panel agreed that in a Diagnostic Protocol guidance is mainly given on laboratory samples; sampling procedures in the field or for consignments (in particular, for asymptomatic plants) should be included in inspection procedures (PM3).

The next meeting of the Panel on Diagnostics in Bacteriology will be held in Spring 2020.