23rd meeting of the Panel on Invasive Alien Plants

The Panel was hosted in Wageningen at the kind invitation of the Dutch National Plant Protection Organisation. The Panel continued its tasks including: reviewing the final documents of the LIFE funded project LIFE IAP-RISK

, prioritizing plant species for pest risk analysis, deciding priorities for PM 9 Standards (National regulatory control systems) and discussing the future work programme for the Panel post the completion of the LIFE IAP-RISK at the end of June 2018. 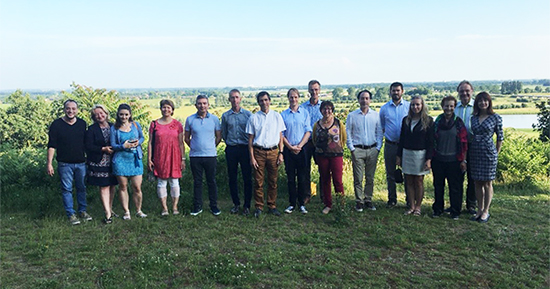 The Panel reviewed the deliverables of the LIFE IAP-RISK project which included 16 PRAs on invasive alien plants. The Panel approved a number of technical documents from the project including a Layman’s report and an After-Life Plan. In addition, information leaflets and posters for each species risk assessed within the project were approved. The Panel agreed that the project had produced significant outputs in a short amount of time.

Panel agreed that a priority for PRA going forward was Ambrosia trifida. A national French PRA is available, and this can act as a substantial baseline document which can be expanded for the EPPO region.

The Panel discussed the EPPO prioritization process and the potential of incorporating questions on climate change and economic impacts into the process. The Panel agreed that a one-day workshop should be arranged ahead of the 2019 Panel meeting on Invasive Alien Plants to evaluate the feasibility of adding these components.

Update on other activities within EPPO

An update on the current situation concerning the project for EPPO to examine the integration of invasive alien plant data from Q-bank into EPPO Global Database was also presented and discussed.

A field trip was organised by the Dutch NPPO where participants visited sites where plant invasions were being managed. These included visiting an active raised bog (a Natura 2000 site) which had been invaded by Vaccinium corymbosum (highbush blueberry) and learning how through a LIFE + funded project the species is being managed and the site is being restored. In addition, two aquatic sites were visited where Ludwigia grandiflora and Crassula helmsii were both under management.