5th meeting of the EPPO Panel on Diagnostics in Entomology

The 5th meeting of the EPPO Panel on Diagnostics in Entomology took place in Budapest at the kind invitation of the National Food Chain Safety Office (NEBIH). The EPPO Secretariat was pleased to welcome new experts from Belgium, the Czech Republic, Finland, Turkey and the European Commission. The Panel continued its task of developing Diagnostic Protocols for regulated arthropods. 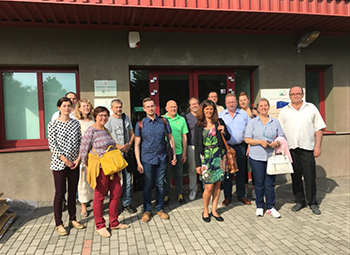 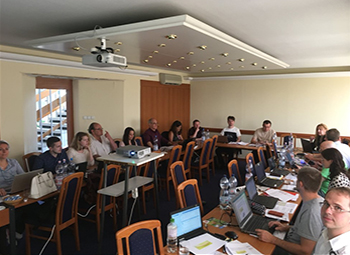 Barcoding in Diagnostic Protocols for arthropods

The Panel suggested that a reference to the EPPO Diagnostic Standard PM 7/129 DNA barcoding as an identification tool for a number of regulated pests should be included in the Diagnostic Protocols for the species for which sequences are available. A Panel member volunteered to browse sequence databases to identify these species.

In a context of increased use of molecular methods for detection and identification of arthropods (in particular DNA barcoding), the Panel discussed the need to include non-destructive DNA extraction methods that would allow specimens to be used for morphological identification and to be included in collections. The Panel suggested that the EPPO Secretariat should collect descriptions of such methods before the next meeting.

Alignment of the EPPO Diagnostic Protocols with the IPPC protocols

The alignment of the EPPO Diagnostic Protocol on Thrips palmi (PM 7/003(2)) with the IPPC protocol (ISPM 27 Annex 1) was discussed. Comments received on the EPPO Standard during country consultation were reviewed and a final version prepared. This version will be presented for approval in 2018.

The Panel discussed the following new pest-specific Diagnostic Standards. Comments received during country consultation on the Diagnostic Protocols for Dacus ciliatus and Zeugodacus cucurbitae and the modification suggested by the author to address these comments were reviewed. Final versions have been prepared which will be presented for approval in 2018.

This new protocol was circulated before the meeting. Comments made by Panel members and modifications suggested by the author were reviewed. The Diagnostic Protocol will be sent for country consultation after summer 2018. Alignment between the three fruit fly Diagnostic Protocols (Dacus ciliatus, Zeugodacus cucurbitae and Bactrocera latifrons) was also suggested and it will be implemented by the EPPO Secretariat.

This new protocol was circulated before the meeting. Comments made by Panel members and modifications suggested by the author were reviewed. The Diagnostic Protocol will be sent for country consultation after summer 2018.

A preliminary draft was presented. It will be further developed by a drafting group. It was noted that specimens are needed to prepare adequate illustrations. The EPPO Secretariat will make contact with scientists involved in research projects on Xylella fastidiosa to encourage them to provide specimens from different European areas.

The Panel reviewed the list of EPPO Diagnostic Protocols in Entomology to confirm stewards, agree on priorities and plan future work. The following proposals for revision were made:

- Two Panel members volunteered to prepare the alignment of the EPPO Diagnostic Protocol PM 7/053 with the IPPC Standard (ISPM 27 Annex 16) before the next Panel meeting.

Contact will be made with scientists attending the conference ‘Preparing Europe for invasion by the beetles emerald ash borer and bronze birch borer, two major tree-killing pests’ (Vienna, on 1-4 October 2018) to identify experts that could develop a Diagnostic Protocol.

Experts from Germany and France volunteered to prepare a Diagnostic Protocol on Strauzia longipennis.

Following a suggestion from Austrian forestry experts, the Panel supported that a Diagnostic Protocol should be prepared on Trichoferus campestris. Additional suggestions were made during the Panel meeting, including: Oligonychus perditus, Anoplophora chinensis, Bactericera cockerelli, Lycorma delicatula.

The next meeting of the Panel on Diagnostics in Entomology will be held in Autumn 2019.