11th Meeting of the Panel on Diagnostics in Nematology

The Panel on Diagnostics in Nematology met in Wageningen at the kind invitation of NVWA (National Reference Centre, NL). The Panel meeting followed directly from the Workshop on Maintenance of Nematode Collections. 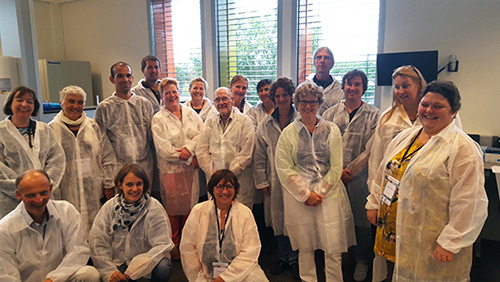 The Panel reviewed one new protocol and several protocols for which revision is in progress (see below). They also made plans for another new protocol.

PM 7/NEW (first draft available) Meloidogyne mali
A draft of this new protocol was reviewed by the Panel. Some small changes and additional tasks (such as preparation of a table of confusing species) were agreed upon. It is planned that this protocol will be sent for country consultation at the end of 2017/early 2018.

PM 7/NEW (suggestion for a new protocol) Longidorus diadecturus
The Panel agreed that this would be a useful protocol and that there is enough information to start working on this. Various members of the Panel volunteered to contribute so a draft should be ready by the end of June 2018.

PM 7/089 Heterodera glycines
This revised protocol was sent for country consultation and the Panel reviewed and addressed all the comments. It was agreed that this protocol should be sent for the final stages of the approval procedure (fast track – formal objection stage).

PM 7/004 Bursaphelenchus xylophilus
A proposal for amendment for the protocol on extraction from insects of larvae (letting dauer larvae moult – not transferring them to fungal plates) will be prepared.

Since the last meeting protocols the following protocols have been approved and published (or are in the process of being published).

The Panel reviewed the Pictorial Glossary and suggested some changes. A revised version will be posted on the website.

The Panel discussed approaches to communication with risk managers in the light of revision of PM 7/76 Use of EPPO Diagnostic protocols. Experts presented how communication is organized in their country including the use of Technical Advice Teams, Emergency Committees and Contingency Plans. These suggestions will be considered when the revision of PM 7/76 is prepared.

The Panel exchanged information on emerging pests. This included an update on the situation of Meloidogyne graminicola and Heterodera elachista in Italy. The situation with Meloidogyne ethiopica and the recently identified sister species M. luci was also presented and discussed.

The Panel discussed the outcomes of the Q-collect project reviewed the criteria listed in the project for nematode reference material (making proposals for what should be required and what should be optional.

The Panel reviewed the content of the Q-bank database and identified potential priorities for integration of nematode species (involving inclusion of sequences, and creation of EPPO Codes for those without them) into the EPPO Global Database.

Ms Munaut (EC DG Santé) made a presentation on the EU Reference Laboratories (EURLs) in plant health. EURLs will help to ensure effectiveness and harmonisation of official controls. EURLs are expected to start their activities in January 2019. The Panel acknowledged that the establishment of EURLs is a positive development that will enhance diagnostic activities and will benefit EPPO member countries including non-EU members.

The next Panel will be held at the EPPO Headquarters in Spring 2019.