Colloquium on the use of biological control agents in protected cultivation (Antalya, TR, 2017-09-28) 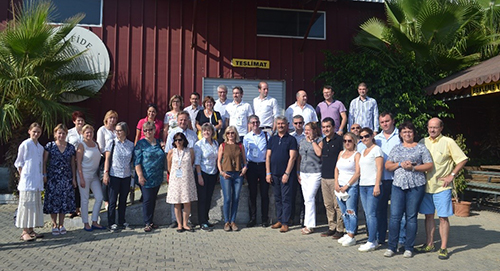 A short history of EPPO’s work on biological control agents

In 2016, a Workshop on the Evaluation and Regulation of the use of Biological Control Agents in the EPPO Region was organized which showed a lack of harmonization in the region. In 2017, the EPPO Secretariat launched a questionnaire on the regulatory framework for biological control agents in EPPO member countries. Twenty countries answered the questionnaire and the responses show in particular that few countries have specific provisions for release of biological control agents. Some countries refer directly to the EPPO positive list in their regulation. Mr Orlinski highlighted the potential benefits of using biological control agents against introduced pests. Finally, he informed the participants of a Decision Support Scheme for the import and release of Biological Control Agents which is under development and will be tested at the next Panel meeting before being sent for country consultation.

Biological control from past to present in Turkey

Mr Doğancan KAHYA, Biological Control Research Institute, Adana/Turkey
The history of the use of Biological Control Agents (BCAs) in Turkey since the beginning of the 20th century was presented. Several examples of successful use of BCAs in different crops (fruit trees, vegetable production) were described. Use by growers of biological control is supported by the Ministry of Agriculture.
The list of BCAs authorized for use in greenhouse vegetable production is:
Aphidius colemani, Aphidius ervi, Orius laevigatus, Amblyseius swirskii, Eretmocerus eremicus, Macrolophus caliginosus, Nesidiocoris tenuis, Encarsia formosa, Phytoseiulus persimilis, Diglyphus isae.
The Biological control research institute carries out mass production of predators and parasitoids as well as side effects trials for plant protection products on Citrus. Details are provided in the presentation.

Ms Lerzan Bakircioglu ERKILIC, Biyotar Company, Hatay/Turkey
In 1970 the Plant Protection Institutes (Adana and Antalya) imported Cryptolaemus montrouzieri and Leptomastix dactylopii from the USA to control mealybugs in Citrus (lemon, mandarin, orange and grapefruit) and pomegranate. This was successful for most of these crops (difficulties were found in grapefruit) and since 2004 the company Biological Agriculture Consulting and Engineering Co. (Biyotar) rears the BCAs and provides support to growers. The programmes of release are detailed in the presentation and now being extended to other crops such as grapevine, banana and rose.

Development and use of novel semiochemical technologies for integrated pest management: Global and local perspectives

Mr Orkun Baris KOVANCI, Uludağ University, Bursa/Turkey
A presentation of different semiochemical technologies was made with examples of their application (monitoring, mass trapping, mating disruption and ‘attract and kill’). Traps are used for early detection of pests (e.g. Diabrotica virgifera), mass trapping is performed for the recently introduced pest Tuta absoluta (with trap densities adapted to the population), mating disruption is performed for Cydia pomonella, and ‘attract and kill’ for Rhynchophorus ferrugineus. Novel technologies for dispensing pheromones are presented such as organic nanofibres, nanogels, drones, recyclable or branch fitted dispensers, as well as possibilities to attract natural enemies in the crops. Details are provided in the presentation.

Mr Çağlar ÇIFTCI, Biobest Company, Antalya/Turkey
The presentation provides information on how Biobest provides support to growers to increase the application of biological control in greenhouse production. The activities of Biobest were presented (production and marketing of beneficial organisms for integrated and biological control, production and marketing of bumblebees for natural pollination, marketing of biopesticides, marketing of monitoring systems, and side effects trials with a database available from the website). The main crops targeted are: tomato, sweet pepper, eggplant, cucumber, strawberry. For sweet pepper, the number of hectares grown under Integrated Pest Management increased from 300 ha during the production periodto 1300 ha inCommunication, using a logo directly on the packages, is performed to educate the consumer on these techniques. Details are provided in the presentation.

Ms Ozlem ALTINDISLI, Directorate of Plant Protection Research Institute, Izmir/Turkey
The first study on biotechnical control started in Turkey in 1973 on sterile insect release application against Ceratitis capitata (studies related to the mass rearing of the Mediterranean fruit fly, to the suitable biological stage for treatment and radiation dose, the ecology and population dynamics of the Medfly and release method). Since that date the Institute has been working on different biotechnical control methods of insects, such as combined application of sterile insect release and biological control methods, which are detailed in the presentation.

EPPO Secretariat
Regulation on BCAs suffers from lack of harmonization between EPPO countries: a wide range of terminology is used, and a lot of overlapping regulatory regimes currently apply to this field (biopesticides, quarantine pests, invasive alien species, etc.). Technically there is a strong case for an eco-regional approach as the release of a BCA in a country could affect neighbouring countries. This ‘soft harmonization’ could begin with terminology (e.g. definition of what is meant by ‘indigenous’). Euphresco has a role to play in collaborative research on BCAs in the future.

Participants concluded that it was important to improve the harmonization with regards to the regulation for import and release, and that such decisions should be taken by competent authorities. A first step, in addition to the preparation of Standards, would be to identify contact points in the different countries to encourage coordination between national activities in EPPO countries.

EPPO activities were welcomed to help to achieve these aims. The EPPO Secretariat should try to encourage countries which did not respond to the questionnaire to reply (this would help clarify the national regulatory framework with their national authorities in charge of environmental issues).