21st meeting of the EPPO Panel on Diagnostics in Bacteriology

The 21st meeting of the EPPO Panel on Diagnostics in Bacteriology took place in the premises of the International Center for Advanced Mediterranean Agronomic Studies (CIHEAM) in Bari, Italy. The Panel continued its task of developing diagnostic protocols for regulated bacterial plant diseases, and was followed by a meeting of the European Association of Phytobacteriologists (EAP). 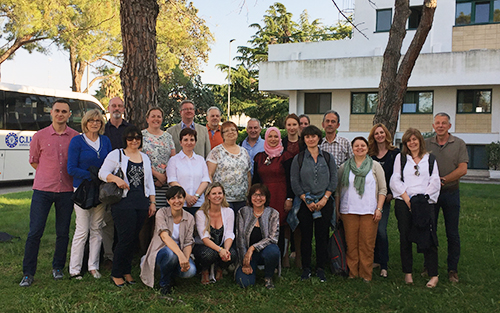 The Panel was informed about a Workshop on flexible scope, to be held on 2017-06-26/28 in Wageningen, NL to allow sharing of experiences with flexible scope in different EPPO countries and identify the critical points to be included in a Standard.

The Panel was informed about the discussions on the quarantine aspect of NGS technologies in terms of communication between researchers and risk managers, establishing a baseline and how to deal with new findings from NGS technologies. The Panel on Diagnostics and Quality Assurance discussed the use of NGS technologies for the diagnosis of plant pests and considered that an EPPO Standard on NGS could be developed in the next 3 or 4 years; a joint meeting of the Euphresco project ‘The application of Next-Generation Sequencing technology for the detection and diagnosis of non-culturable organisms: viruses and viroids’ and the COST Action ‘Application of next generation sequencing for the study and diagnosis of plant viral diseases in agriculture’ will be held in Bari (IT) on the 2017-11-22/23.

Ms Munaut (EC DG Santé) made a presentation on the EU Reference Laboratories (EURLs) in plant health. The need to establish EURLs is linked to the need to ensure effectiveness and harmonisation of official controls. The activities of the EURLs are expected to start in January 2019. The Panel acknowledged that the establishment of EURLs was a positive development that will enhance diagnostic activities and will benefit EPPO member countries including non-EU members.

Future priorities for revision of pest-specific protocols and future programme

The Panel discussed the future priorities for revision and Lead authors were identified: they will perform a literature review to identify publications, changes in taxonomy and any other useful information that may require a revision of the Diagnostic Protocol(s) for which they are Stewards. A report will be sent to the EPPO Secretariat by the end of September 2017.
The bacteria suggested for development of an EPPO Diagnostic Protocol are: Curtobacterium flaccumfaciens pv. poinsettiae and Erwinia pyrifoliae. C. flaccumfaciens pv. poinsettiae has been recently added to the EPPO Alert List and express Pest Risk Analyses were carried out by Germany and the Netherlands. Information on tests for detection and identification will be gathered to explore the feasibility of developing a new Diagnostic Protocol.

ISO/CD 13484 Molecular biomarker analysis - General requirements for molecular biology analysis for detection and identification of plant pests
The Panel was informed of the progress made in ISO with this Standard which covers indirect tests performed in plant pest diagnostic laboratories. The EPPO Secretariat was invited (as representative of the plant health field) to join the Working Group involved in the development of the Standard. Concerns have been expressed on this ISO Standard by plant health experts which so far could not be solved. The EPPO Secretariat together with a group of experts from the Panel on Diagnostics and Quality Assurance will continue to follow this issue.

Guidelines on Reference Laboratories
At its last meeting, the Panel on Diagnostics and Quality Assurance prepared the ‘Guidelines on the main tasks of Reference Laboratories for official plant pest diagnostics’; the Standard was sent for country consultation and no comments were received apart from some editorial modifications. The Standard will be presented for adoption to the Council in September 2017.

PM 7/76 Use of EPPO Diagnostic protocols
During the discussions on various protocols it was noted that more examples should be provided on what critical cases are. It was agreed that in the next revision of PM 7/76 a section on communication between laboratories and risk managers could be added.

Update on other activities within EPPO

Euphresco project on correlation between indirect tests and isolation for bacteria
At the EPPO Panel on Diagnostics and Quality Assurance, it was noted that the approach followed for the detection and identification of pests varied between disciplines. In the framework of the discussion on the need to systematically isolate culturable bacteria, a suggestion was made to initiate a Euphresco project to review the current diagnostic procedures for bacteria to evaluate the extent of discrepancies between indirect test results and isolation or pathogenicity tests. The Panel discussed the feasibility of the project, its usefulness and the type of information to be recorded. The Panel agreed that it was possible to analyse the outcomes of past tests retrospectively but it was not recommended to analyse information from tests carried out more than 5 years ago, in order to evaluate the information on the basis of performance of tests used recently. The Panel suggested that the project should cover bacteria for which isolation is challenging and bacteria that are easy to isolate; critical cases will not be addressed. The Panel recommended involving in the project laboratories that are proficient in the use of both the indirect tests and the isolation procedures and that a declaration of proficiency should be requested before acceptance in the project. The Euphresco project could start during the spring 2018.

Update on Q-bank
Q-bank is a database on quarantine pests which originally started as the result of a Dutch project to strengthen the plant health infrastructure. Q-bank was launched in 2010 and further developed in the framework of the EU project QBOL. Since 2012, a European steering committee and a group of European curators is in charge of its maintenance. The Dutch NPPO presented a request to the EPPO Council that this database could be hosted within EPPO in the future and a project for preparing the transfer of Q-bank data and functions was proposed to the EPPO Council (September 2016) that agreed to fund it.
Safeguarding data (sequences for blasting, barcoding protocols and where to find biological material) was seen as a short-term need and it was agreed that species for which specific data have to be transferred should be identified. It was agreed to organise a meeting with experts from the Panel and curators of the Q-bank bacteria database to review the data available and identify priority pests for diagnostics; it was noted that pests that can be encountered in diagnostics should be included in the database for the purpose of identification. The evaluation should be completed by February 2018 and conclusions will be presented to the EPPO Executive Committee in April and Council in September of the same year.

The Panel celebrated the retirement of Ms Müller from the Julius Kühn Institut, Germany. Ms Müller contributed over many years to EPPO Diagnostics activities; we wish her a well-deserved retirement.

The next meeting of the EPPO Panel on Diagnostics in Bacteriology will be held in the Autumn of 2018.