22nd meeting of the Panel on Phytosanitary Measures for Potato 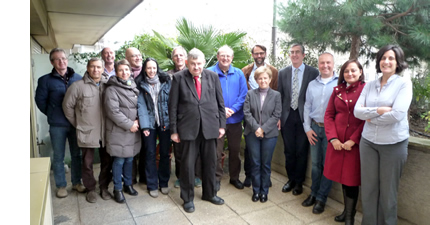 The 22nd meeting of the Panel on Phytosanitary Measures for Potato took place at the EPPO headquarters on 2015-05-19/21.

The Panel carried on the development 3 draft regulatory control system Standards (in series PM9) on:

The Standard on Epitrix was finalized and will be sent for country consultation.

The Panel set up a working group to develop guidance on control of potato volunteers, as this is often a requirement in PM9 Standards.

A first draft of a Standard on the Management of the phytosanitary risks of soil associated with potato tubers and potato waste was reviewed. It is intended to consult the potato industry and the other relevant stakeholders on this draft.

The Panel was briefed on the EPPO project on Regulated non-Quarantine Pests and its possible involvement in it. It was also informed on the revision of the EPPO Diagnostic Protocol on Synchytrium endobioticum, and the need to revise other standards on this fungus.