10th Meeting of the Panel on Diagnostics in Nematology

The Panel met in Vienna on 2016-09-07/09 at the kind invitation of AGES (Austrian Agency for Health and Food Safety). The Panel reviewed several protocols for which revision is in progress. 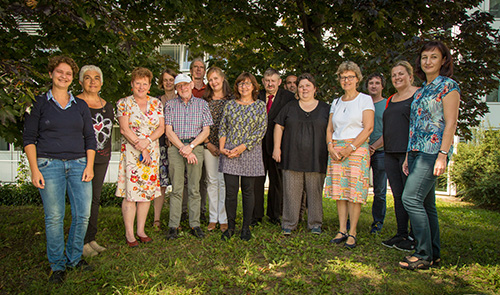 Globodera pallida and G. rostochiensis
A fourth revision of the Standard is in preparation. The draft revision was sent for country consultation in 2015 and comments received needed a face to face discussion before the document could be finalized. In particular one country suggested the addition of a new key to potato cyst nematode species. This suggestion was welcomed and a small group of experts will prepare this key. The Standard is expected to be sent for the final stages of approval by the end of 2016.

Xiphinema americanum sensu lato
An IPPC diagnostic protocol on Xiphinema americanum sensu lato was approved in January 2016. A revision of the EPPO protocol to align it with the IPPC protocol has been prepared. Since the adoption of the IPPC protocol, new species have been described and have been added to the keys in the EPPO protocol. The revised version should be sent for country consultation by the end of 2016.

Heterodera glycines
A revision of the protocol was reviewed and the Panel recommended that contact should be made with scientists in North America to gather more information on available molecular tests. The revised protocol should be sent for country consultation by the end of 2016.

Bursaphelenchus xylophilus
An IPPC diagnostic protocol on Bursaphelenchus xylophilus was approved in January 2016. The Panel noted that the current version of the EPPO protocol is in line with the IPPC protocol although a reference to the LAMP test (Leal et al 2015) could be made as well as to the new EPPO horizontal Standard on barcoding. It was also suggested that pictures of Monochamus infested wood could be added to the EPPO Global Database and referred to. An addendum to the EPPO Standard will be prepared by the EPPO Secretariat.

Other topics
The Panel reviewed the Pictorial Glossary and suggested some changes. A revised version will be posted on the website by the end of September 2016.
The Panel exchanged information on nematodes detected for the first time in the region (Meloidogyne graminicola in Italy under eradication and B. luxuriosae a non-pathogenic nematode detected in Portugal).
The Panel noted the recent publication suggesting a synonymization of Meloidogyne ethiopica with M. luci (Jansen et al., 2016).
The Panel also raised a number of horizontal issues which will be discussed further at the Panel on Diagnostics and Quality Assurance in January 2017, for example the requirement for certain controls for PCR.
The Panel discussed the outcomes of the Q-collect project and considered that it is essential that information is shared between the laboratories on how to maintain collections in nematology. It was agreed that a Workshop on this topic should be organised and could be held back-to-back with the next Panel meeting.

Next meeting
The next Panel will be organised in the Netherlands at the kind invitation of the National Reference Center (NRC), Wageningen, NL. The Panel will be held back-to-back with a Workshop on how to maintain collections in nematology. The provisional dates are for the week of the 4th of September 2017 (to be confirmed).