The 1st EPPO Panel on Diagnostics in Mycology took place at the EPPO headquarters. Thirteen participants and 3 observers joined the meeting. As a major priority on the agenda was the revision of the protocol on Synchytrium endobioticum two experts from Julius Kühn Institute (DE) joined the Panel as observers to present the outcomes of the Cornet ‘SynTest’ project and assist in the revision. 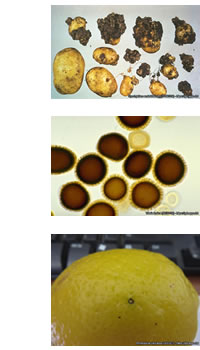 The objective of this revision was to add PCR tests and to add new information concerning pathotype identification as the differential cultivars in the current protocol were considered out of date, and some of them were difficult to obtain. A revised version of the protocol was reviewed at the European Mycology Network (EMN) meeting in 2014 and it was agreed that this version could be sent for country consultation. Many comments were received, including some major comments. At that time there were two major projects on S. endobioticum(Euphresco-SENDO and Cornet ‘SynTest’) and it was decided that the revision should wait for the outcomes of these projects. As these are now finished, experts involved in the projects were invited to the Panel meeting to present the results (Mss Schleusner and Flath for Cornet ‘SynTest’ and Mr van Leeuwen for Euphresco-SENDO). The comments were reviewed by the Panel and the protocol revised in light of these comments and a new table of differential cultivars for the identification of pathotypes was agreed based on the results of the projects. As the changes to the protocol were major it was agreed that it should be sent for a new round of country consultation.

Tilletia indica (PM 7/29)
The Panel reviewed the EPPO protocol on this pest and proposals were made to revise it to be in line with the new IPPC protocol (Appendix 4 to ISPM 27). Differences were noted between the two protocols which need to be discussed further. In addition the author of the revision is working on a real-time PCR test that can be used directly for screening pellets which will be added.

Panel members identified specific needs for revision according to the procedure put into place for annual review of protocols. The current EUPHRESCO projects were also considered as many of these will provide data that could be useful for revisions.

The Panel was informed of the latest developments, in particular the progress on the new EPPO Standards on DNA barcoding as an identification tool for regulated pests and on Guidelines for the Authorization of Laboratories (both about to be sent for country consultation), and the revised EPPO Standard on Use of EPPO Diagnostic protocols (ready to be sent for country consultation and then for the fast track approval procedure).
The Panel was informed about the status of ISO Standard ISO/CD 13484 Foodstuffs - General requirements for molecular biology analysis for detection and identification of destructive organisms in plants and derived products and the possibility for ISO members to be ready to comment on this Standard.

Recent meetings and projects and their outcomes of interest to the group were presented, in particular the 3rd Workshop for heads of laboratories and the Q-collect project. The Panel discussed in particular the document ‘Draft guidelines on Quality assurance for reference collections’ which was drafted as part of the Q-collect project. Although many recommendations made in the project were considered very valuable, it was noted that further review was needed to establish a system causing minimum disruption of activities such as interlaboratory comparison or test validation. The Panel was given an update of the situation with Q-bank and the results of the survey on use of this database.

The EPPO Secretariat and the European Mycology Network (EMN) plan to hold their meetings back to back in Spring 2017. This would then be in April, 2017 in Croatia.