52nd meeting of the Panel on Phytosanitary Measures

The 52nd meeting of the Panel on Phytosanitary Measures took place in Bologna (IT) at the kind invitation of the Regional Plant Protection Service of Emilia-Romagna . The Panel had the opportunity to visit a nursery producing aquarium plants. 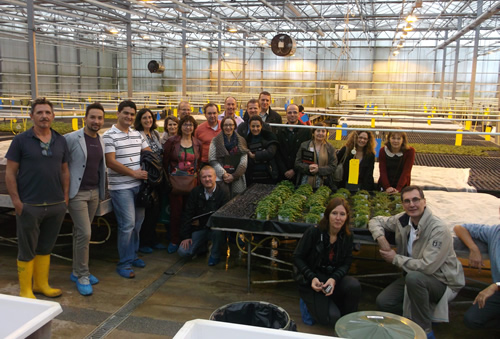 The Panel finalized the draft guidance on the phytosanitary measure ‘plants grown under complete physical isolation’. It was sent for country consultation immediately after the meeting.

The Panel discussed how to provide more guidance to better define pest-free areas and buffer zones to be applied to manage pest outbreaks. A guidance document will be elaborated. The Panel was presented the work performed in EFSA on the evaluation of risk reducing options.

The Panel considered the revision of the taxonomy of the following listed pests: Apriona germari and Phyllosticta citricarpa. As a consequence the Panel recommended that Apriona rugicollis is added to the EPPO A1 List, and that within Phyllosticta species, only P. citricarpa should be listed by EPPO.

A new version of the UK Express PRA on the polyphagous shot hole borer (Euwallacea sp.) and Fusarium dieback (Fusarium euwallaceae) was reviewed. The Panel agreed that this disease should be added to the Alert List.
The situation of Platynota stultana was reviewed, based on a Express UK PRA. The update of the Spanish PRA considered by the Panel in November 2014 was not available yet. A decision will be taken at the next meeting when more information is available on the pest damage in Spain.
The Panel reviewed an Express UK PRA on Xylosandrus crassiusculus. It considered that it is not a priority to recommend measures for this pest as it is not under official control in Italy. The Panel considered that this new introduction of a pest of softwood demonstrates that measures applied for the import of softwood should be strengthened. The Panel recommended that horizontal measures should be envisaged for softwood. This may be considered further by the Panel on Quarantine pests for forestry.
The German Express PRA on Strauzia longipennis was reviewed. The Panel noted that the risk of entry was limited and therefore the priority to recommend phytosanitary measures for Strauzia longipennis will be discussed again when the updated PRA and the results of surveys conducted in different countries are available.
Thrips setosus: a Dutch Quick scan and an German Express PRA were considered. A circular will be sent to EPPO countries to raise awareness and recommend surveys. T. setosus will be rediscussed in November 2016 except if new information becomes available before.
Pomacea maculata and P. canaliculata (EFSA Scientific Opinion on apple snail) was discussed. The Panel agreed that EPPO should recommend regulating the Pomacea canaliculata complex as quarantine pests, however some adjustment are needed in the PRA report prepared on the basis of the EFSA Opinion in particular regarding the maps of potential establishment in the EPPO region.

- DROPSA
An update on the progress made on the EU FP7 project DROPSA (in which EPPO is a partner) was presented. Alert lists of pests that may be associated with import of Vaccinium and apple fruit are being finalized.
- Early warning
The Panel was presented with several projects on sentinel plants and early warning, in particular the COST Action ‘Global Warning’ and the International Plant Sentinel Network. It was noted that the outcomes of such projects could provide information for early warning.