The ad hoc Panel on Harmonization of data on plant protection products met in Braunschweig (DE), 2015-02-17/19 to discuss the development of the EPPO codes. The main reasons to develop the EPPO codes for plant protection products (PPPs) uses include the need for harmonized definitions of declared uses of PPPs to facilitate comparison among countries. This is of particular relevance to registration authorities in the framework of the mutual recognition and zonal assessment required in EU Regulation 1107/2009. Data exchange and the work related to extrapolation of data for efficacy evaluation of minor uses would also be facilitated by the development of harmonized codes for PPP uses.

Development of the EPPO codes for PPPs

The Panel agreed that a harmonised system to consistently characterize PPP uses and a code hierarchy are needed for the EPPO region and agreed that proposals for elements to characterize uses of PPPs (including crop groups, target groups, destination, treatment etc.) should be developed. The set of principles to be followed to develop the codes were discussed at the meeting and it was reiterated that, while developing codes in the future, EPPO will maintain the stability needed by the users and the principle that codes are not deleted or modified nor is the meaning of a code changed retrospectively will be followed.
The Panel developed proposals for crop groups for cereals, arable crops, vegetables and fruit to be presented to the Working Party on Plant Protection Products in May 2015. The Panel also discussed the development of pest groups, other targets and the other elements characterizing PPP uses. A proposal for a work plan was made. 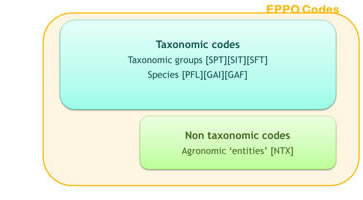 The codes to be developed to characterize PPP uses are, by their nature, ‘non-taxonomic’ as they are not based on biological taxonomy and are not always linked to a hierarchy. Before proceeding with the development and implementation of such codes an important issue had to be solved considering that the current EPPO coding system contains two different types of entities (taxonomic entities and non-taxonomic entities) without providing the users, and their IT systems, with any means of differentiating them. A technical solution was proposed which would make a clear separation between taxonomic and non-taxonomic codes and would allow stability of the system over time while ensuring that the needs of the different users of the system are met.

Governance of the EPPO codes and involvement of the users

The Panel discussed appropriate governance for the creation and maintenance of EPPO non-taxonomic codes. For these, the EPPO Secretariat cannot rely on any ‘external scientific authority’ as it does for the codes defined by biological taxonomy (the taxonomic codes). The Panel also discussed ways of keeping users informed and consulted about potential additions to the EPPO codes.