9th Meeting of the Panel on Diagnostics in Nematology 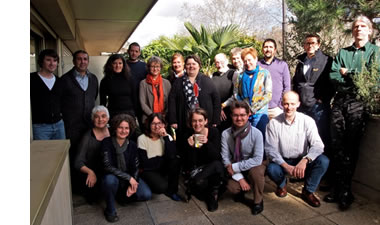 The Panel met at the EPPO headquarters in Paris and continued its task of developing and revising Standards in nematology.

A new procedure to prepare/revise a diagnostic protocol (with a lead expert coordinating the work of the drafting group) was proposed to the Panel, who agreed to implement it for the development of future Standards in nematology.

IPPC protocols
The development of an IPPC diagnostic protocol follows three steps: 1) Development of the protocol by a drafting team, 2) Review of the document by an international group of experts, 3) Consultation of the draft by member countries. A few years ago it was agreed that the comments on IPPC diagnostic protocols would be coordinated at EPPO level and that the specific Panels would review the documents to prepare regional positions. During this meeting, the Panel prepared the regional comments for the diagnostic protocols on Bursaphelenchus xylophilus and Xiphinema americanum sensu lato.

EPPO protocols under revision
A proposed revision of the diagnostic protocol on Globodera rostochiensis was discussed, in particular the need to include each of the molecular tests currently proposed. During country consultation, members will be asked to provide information on their use of the various molecular tests in routine analysis.

A similar discussion was held on the need to keep all the molecular tests included in the draft revision of the Standard on Meloidogyne chitwoodi and M. fallax: as the tests are widely used in the EPPO region, it seemed appropriate to keep all of them. A revised version of the Standard on Aphelenchoides besseyi is in progress and will be elaborated further as soon as the IPPC protocol on this pest is sent for member consultation.

Work on the revisions on the diagnostic protocols on Radopholus similis and Heterodera glycines will continue over the next months.

The revision of the Standard on Meloidogyne enterolobii was discussed and a final revision will be sent for country consultation by summer 2015.

EPPO future priorities for revision
The need for revision of existing protocols was discussed. It was agreed there is no necessity to review the Standard on Nacobbus aberrans and Hirschmaniella spp. The EPPO diagnostic protocols on Ditylenchus destructor & D. dipsaci and Xiphinema americanum sensu lato will be prepared when the IPPC protocols will be finalised, in order to align the content of IPPC and EPPO Standards.

The Panel presented comments on the EPPO Standard PM 4/35 on ‘Soil test for virus–vector nematodes in the framework of EPPO Standard PM 4 Schemes for the production of healthy plants for planting of fruit crops, grapevine, Populus and Salix.’ It was noted that the list of nematode vectors included in this Standard should be revised. Some fruit tree viruses are also not included. The EPPO Secretariat will prepare a summary of these comments for the Working Party on Phytosanitary Regulations.

The Euphresco network, hosted within EPPO since June 2014 was presented, with a special focus on the funding activities that have started and the possibility for scientists to inform Euphresco national representatives on topics of interest was discussed. An update on the current status of EPPO potentially hosting Q-bank was also presented.