52nd Meeting of the Working Party on Phytosanitary Regulations

The 52nd meeting of the Working Party on Phytosanitary Regulations took place in Costesti, Moldova on 2014-06-17/20 at the kind invitation of the NPPO of Moldova. There were 28 participants from 17 EPPO countries and 5 observers from the European Commission, the Eurasian Economic Commission, the North American Plant Protection Organization and APHIS/United States Department of Agriculture. A summary of the different Panel meetings and Workshop which took place since the last meeting was presented to the Working Party (short summaries of these meetings are posted on this website). The Working Party also discussed future activities and priorities and made several recommendations on the future EPPO Strategy which were presented to the EPPO Council. 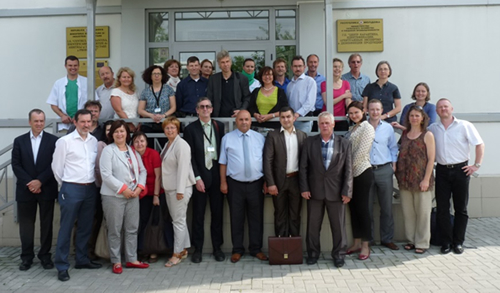 The Working Party recommended that 5 new pests should be added to the EPPO Lists of pests recommended for regulations: Neoleucinodes elegantalis, Aromia bungii, Acidovorax citrulli (A1 List of pests absent from the region), Polygraphus proximus, Parthenium hysterophorus (A2 List of pests present in the region). Risk management options for Agrilus anxius and Oemona hirta were also revised.

8 new Standards were considered ready to be presented for approval at Council:

Mr Horn (NL), chair of the IPPC Steering Group on e-Phyto presented an update on Electronic certification. It was noted that support from experts from EPPO countries with expertise especially in codes, terminology, harmonization and business rules would be welcomed.

Mr Nordbo (DK) member of the Standards Committee presented an update of the activities conducted in this Committee including specifications for new Standards and a review of the international standards currently in preparation including drafts standards to be sent substantial concerns commenting period.

Ms Lee Technical Director of NAPPO presented NAPPO activities in particular the Standards approved in 2012-2013 and the new strategic plan.

Relationship between EPPO and other regional bodies

The Working Party recommended that EPPO member countries should be encouraged to use the EPPO online pest reporting system and to notify new pest statuses as well as all interceptions (including interceptions of non-regulated pests). The Working Party took note of recent developments in communication (in particular the  ‘Don't risk it’ campaign) and commented that EPPO should take account of developments in the IPPC communication strategy.

The Working Party discussed the current EPPO PRA process and how it could be improved. It was agreed that the Decision support scheme for an express PRA (PM 5/5) should normally be used by EPPO EWGs to perform PRA, unless specific reasons are known or arise requiring the use of the EPPO Decision-support scheme for PRA (PM 5/3) or sections of it. The Working Party recommended that the Secretariat draw up draft descriptions of circumstances for use of different levels of PRA (or equivalent) which may be required (either at EPPO or national level). It also recommended that a survey on the use of the different schemes should be organized. The need to revise or prepare new PRA Standards will then be evaluated. The Working Party supported the approach proposed by the Panel on Phytosanitary Measures for the recommendations of Pest Free Areas in risk management options.

The Working Party recommended that Expert Working Groups (EWG) for PRA should be organized in 2014-2015 for Heterobasidion irregulare and for two invasive plants (to be selected by the Secretariat). It approved the decision made by the Panel on Phytosanitary Measures to organize an EWG on thousand cankers disease (caused by Geosmithia morbida and Pityophthorus juglandis).

The pathway study prepared on Tomato fruits was presented and the Working Party welcomed its results. It noted that the study provides sufficient evidence to recommend that a phytosanitary certificate (PC) should be required for the import of tomato fruits into the EPPO region while recognising that more in-depth study may be needed for some pests.  The EPPO Secretariat was invited to prepare a summary document based on the outcome of the study to justify this horizontal requirement for a PC. The Working Party noted that a study on non-manufactured wood commodities had started in 2014 and that an EWG would be organized to discuss its results in autumn.

In addition to the regular programme of preparation and revision of diagnostic protocols, specifications for two new Standards were approved. These Standards should be developed in 2015-2016 (Guidelines for the authorization of laboratories and Guideline on national reference laboratories).

The Working Party proposed that an EWG should be organized to prepare a pest-specific contingency plan.

The Working Party revised the Terms of Reference (TOR) of several Panels working under its supervision (Panel on Phytosanitary Measures, Panel on Phytosanitary Inspections, Panel on Diagnostics in Mycology) and considered a possible extension of the TOR of the Joint EPPO/IOBC Panel on Biological Control Agents, from safety of IBCAs’ use to their efficacy and possibilities in the control of quarantine pests this should be further discussed.

The Working Party was informed of the involvement of EPPO in different projects (Testa, Invasive Plants, Q-collect, Euphresco, EPPO codes, Regulated non Quarantine Pests etc.), as well as in potential future projects of EU horizon 2020. The Working Party was informed that discussions continue on the possibility for EPPO to host the Q-bank database. It was noted that that Q-bank can only be hosted by EPPO if external funding becomes available.

The next Working Party on Phytosanitary Regulations is due to convene in Larnaca, Cyprus, on 2015-06-16/19.