Workshop for inspectors on contingency planning

The Workshop on contingency planning organized by EPPO with help from DEFRA and the Royal Botanic Gardens in Kew (UK) gathered 49 participants from 22 countries for presentations, exchange of experience, a day-long exercise, and visits of the phytosanitary inspectorate for Heathrow Airport.

The Workshop received background information about the UK plant health service, Kew Gardens, EPPO and the principles of contingency planning, before listening to presentations about the experience in Netherlands, Sweden and Germany of learning lessons from outbreaks and developing and testing plans for managing pest outbreaks.
On the second day the Workshop split into four groups of about ten to carry out an extended table-top exercise based on the scenario of a finding of Anoplophora chinensis in the neighborhood of Kew Gardens.

On the final morning Workshop participants also had the opportunity to visit the plant quarantine facilities and the mycology laboratory at Kew, and to feed in ideas for the development of EPPO Standards for Inspections.  In the afternoon most participants took advantage of the optional visit to see the phytosanitary inspection systems and processes at Heathrow airport. Thanks were expressed to the Royal Botanic Gardens, Kew for hosting the event, and to the UK Department for Environment, Food and Rural Affairs for organising much of the programme and covering the cost of the venue. 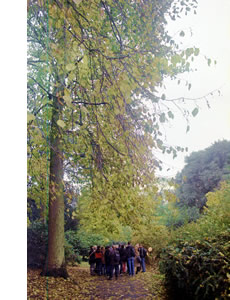 Conclusions from the Workshop

Conclusions were agreed arising from the experience of the exercise. Three needs were emphasised:

Chain of command
This may be based on the normal organization of the NPPO, or may be more complicated where additional agencies are involved, such as forestry services, or local or regional authorities.  It must be clear who is responsible for what. Who is setting the objectives at each stage of the response and making the decisions about how to achieve those objectives? If the problem becomes worse or more complicated than expected, how is the command structure extended or escalated to cope with the new situation?
In some contingency plans specific responsibilities are allocated for elements such as logistics, communications, evidence, mapping, field response, personnel and finance.

Resources
Resources additional to those of the NPPO may come from local or regional authorities, from government emergency planning teams, from related areas (such as animal health teams), or may be bought in as short term staff or contractors.
Local residents may provide a resource for monitoring their trees as well as a challenge to the actions proposed.  Resources should be deployed rapidly to provide reliable evidence of the situation on the ground (e.g. an early joint visit to the site by an entomologist, a forester and a plant health inspector).  Resources, including expertise, may also be sought from other countries which have encountered similar events.
In general it is easier to prepare for a worst case scenario and then scale down the resources when subsequent information is reassuring than to scale up resources as a problem gets more serious.  The trigger points for escalation can be established in advance in a contingency plan; for example when to call on external resources.
The question of who pays for what should be addressed through contingency planning. Experience of NPPOs is that it is not realistic to expect householders to pay for removal of trees from private gardens, for example, so a line of funding needs to be established for this purpose. For commercial landowners contingency planning may help to establish an awareness of their risks, including financial risks, and encourage better management of those risks.

Communication
Communication is needed within the NPPO, up to senior managers and Ministers, to stakeholders, and, for some pests, local residents and the media.  Meetings with stakeholders and, for some pests, the local public may be an important way of listening to concerns and explaining options available and likely results. Messages may be tailored to different audiences (e.g. to local residents “we need your help to find this pest” and to the media “we are managing the situation”), but must be consistent. Facts and figures must be accurate. This may mean a single “common operating picture”: a summary document issued at a particular time of each day, or at a particular day of each week.  Intermediate updates should be avoided if possible to avoid confusion. Authorities should not wait until everything is known before communicating. Factual information (e.g. experience in other countries) is better than speculation which may raise unrealistic expectations or fears.
Uncertainty is fine if acknowledged. If others from outside the NPPO can give public support to the action this makes the message much stronger. Communications professionals should be involved, but messages must be signed off through the same structures which are managing the incident and must be technically sound.

General points
The exercise undertaken was on a known major pest in a sensitive location, backed by significant experience of eradication in the EPPO region.  It is not possible to press the “red button” for all findings of potentially serious pests, if the risks are not known. An “orange button” also needs to be available. Many of the same principles will apply but the level of resource and communication may be lower, and decisions may all be taken within the NPPO, at least initially.
Pest specific contingency plans are ideal, but some pests (e.g. longhorn beetles) can be grouped if many of the elements are the same. EPPO Standards may help, but it is important for each country and administration to go through the process of thinking about how it would react in an emergency, and not just adopt someone else’s plan.
“In the first two days of an incident 80% of the information available to you will be wrong but you will not know which 80%”!

Evaluation and learning lessons
Evaluation and learning lessons are important after any major outbreak or exercise. Records of decisions and the evidence on which they were based should be kept for those purposes. Incident management structures for an outbreak should be kept in place until the evaluation is completed. The evaluation team should include at least one person who was not involved themselves in managing the incident. Outbreaks and exercises may generate increased awareness of plant health, and can be used to engage groups such as schools in monitoring for any recurrence of the pest.

Value of exercises
Exercises were agreed to be a valuable way to test contingency plans, identify gaps, and to raise awareness among decision makers and stakeholders about the potential consequences of outbreaks of plant pests. They show that the NPPO is alert to problems and anticipating them. Contingency planning and exercising may also help to drive improvements in biosecurity to avoid the scenarios presented, and to improve surveillance and public awareness so that outbreaks are more likely to be found at an earlier stage and successfully managed. 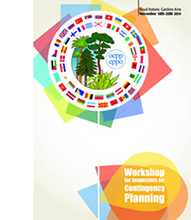 Planning and performing real-time exercise in the field of plant health – Catrin Molander and Anja Bertilsson (Swedish Board of Agriculture, SE)