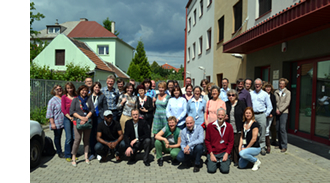 The meeting was held back to back with the 17th Annual Meeting of the European Mycological Network (EMN). Thirty-three participants attended from 20 countries (download a list of participants ).

Phytophthora lateralis
The diagnostic protocol for Phytophthora lateralis was reviewed (the author had added an appendix on real-time PCR but was awaiting publication of a paper on the validation of this test). The changes requested to this protocol will be made and it should be sent for country consultation in the summer (2014).

Ceratocystis platani
The EMN reviewed the comments received during country consultation and the author’s responses to these comments. It was agreed that the final version of this revised protocol should be send for final approval using the fast-track approval system following the meeting.

Plasmopara halstedii
The EMN reviewed the comments received during country consultation. It was agreed that the final version of this revised protocol should be send for final approval using the fast-track approval system following the meeting.

Mycosphaerella dearnessii & Mycosphaerella pini
This protocol had been revised to add details on Dothostroma pini as well as adding data on new hosts. The EMN reviewed the comments received during country consultation and the author’s responses to these comments. The EMN discussed the Amsterdam Declaration on Fungal Nomenclature ‘one fungus one name’ and how it should be implemented in particular in diagnostic protocols such as this one and in databases. The proposed new title for this protocol was Lecanosticta acicola (formerly Mycosphaerella dearnessii), Dothistroma septosporum (formerly Mycosphaerella pini) and Dothistroma pini. It was agreed that Mr Crous, (CBS-KNAW Fungal diversity centre) should be consulted concerning the names used in this protocol before it was circulated using the fast track approval procedure.

EMN members identified specific needs for revision according to the new procedure put into place for annual review of protocols.

Synchytrium endobioticum
The EMN went through the sections of the protocol in detail. It was suggested that a test performance study on the Spieckermann and the Glynne-Lemmerzahl tests would provide additional data but that the revision should not be delayed until this data is available. It was agreed that this protocol should be sent for country consultation and that validation data can be added at a later stage.

Tilletia indica
The EPPO Standard will be revised so it is in line with the new IPPC Diagnostic Protocol.

The EMN was informed of the latest developments, in particular the approval of the revised EPPO Standard PM 7/98 on Specific requirements for laboratories preparing for accreditation for a plant pest diagnostic activity, and the new Standard which will be submitted for final approval this year on Guidelines for the organization of interlaboratory comparisons by plant pest diagnostic laboratories.

Recent Workshops and their outcomes of interest to the group were presented, in particular the EPPO Workshop on setting Ct cut-off values for real-time PCR. New EPPO work and involvement in projects were presented these include the EPPO Global database, and participation in the EU FP 7 TESTA project on seed health, the Q-collect project and the hosting of the EUPHRESCO network Secretariat.

It has been agreed that EPPO will create a Panel on Diagnostics in Mycology to be consistent with the other EPPO Panels on Diagnostics. This new Panel will meet every 18 months for 2 or 2.5 days. The first meeting of this Panel will be held in Paris on the 10th-12th of November 2015. Requests for nominations were sent to Heads of NPPOs after the meeting.

Warm thanks are due to the hosts at the National Food Chain Safety Office, and in particular Ms Halász, for the excellent organization of the meeting.