3rd Meeting of the Panel on Diagnostics in Virology
and Phytoplasmology

The Panel on Diagnostics in Virology and Phytoplasmology met in Rome at the kind invitation of Ms Barba. Altogether, 17 Diagnostic Protocols on viruses and phytoplasmas have now been approved and published. This short report highlights the main conclusions of the Panel. 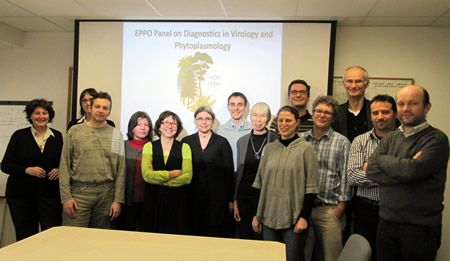 A new Standard on Andean potato latent virus and related tymoviruses is in preparation. A first draft was discussed and a new version will be prepared for the next meeting. The Panel also considered the following adopted Standards and whether they required revision:

EUPHRESCO
The Euphresco projects on viruses, viroids and phytoplasmas were presented for the Panel members to explore synergies with the Panel activities. The EUPHRESCO projects discussed included:

Project slides and available final reports for all Euphresco projects are available under Research projects / Portfolio of the EUPHRESCO website.

TESTA
A specific session took place in relation to the project Seed health: development of seed treatment methods, evidence for seed transmission and assessment of seed health (TESTA). Two presentations were made of the TESTA outcomes on generic DNA/RNA extractions methods and generic real-time PCR assays:

The next Panel meeting will be held in Paris, at the EPPO Headquarters in spring 2016.