5th Meeting of the Panel on Diagnostics and Quality Assurance

The Panel was hosted by the Julius Kühn Institut in Kleinmachnow. The Panel continued its task of developing Diagnostic Protocols for regulated pests. Altogether, 122 Diagnostic Protocols including 9 General Standards (also called Horizontal Standards) have now been approved and published and approximately 10 are in different stages of preparation. 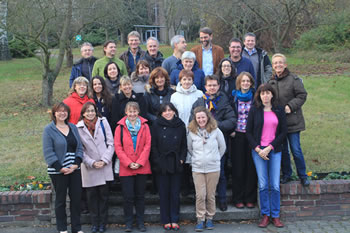 The Panel discussed the involvement of EPPO experts in contributing to the development of IPPC Diagnostic Protocols. In order to continue to ensure fruitful collaboration with IPPC, EPPO has been invited to participate to the future meetings of IPPC Technical Panel on Diagnostic Protocols.

The Panel agreed to update the EPPO ‘Instruction to authors on the format and content of a Diagnostic Protocol’, in particular numbering the sections of the protocols.  To ensure consistency among documents, EPPO is currently developing a checklist for the content and format, similar to that already in use for IPPC Diagnostic Protocols.

A new Panel on Diagnostics in Mycology has been formed recently, which will lead the work on EPPO Diagnostic Protocols on fungi.

The Diagnostic protocol on Spodoptera spp. was reviewed, and the protocol will be sent for country consultation.

The Phytophthora lateralis Diagnostic Protocol will be modified according to Panel’s feedback, and the document will be submitted to the Working Party and Council for final approval.

The Panel agreed that the work on Diagnostic Protocol on Aleurocanthus spiniferus and A. woglumi, should be maintained despite the difficulties linked to the differentiation of the species, and it will be discussed further at the next Panel on Diagnostics in Entomology.

The Panel discussed in detail a document on the needs of plant pest diagnostic laboratories with regards to flexible scope. This document will be used during discussions with the European cooperation for Accreditation (EA). The document focusses on the explanation of the plant health context, challenges and possible solutions for the implementation of flexible scope.

The Standard on ‘Documentation and reporting on a diagnosis’ was revised and will be sent for country consultation in 2015.

The Panel reviewed a first draft of a Standard ‘Guidelines for the authorization of laboratories’, allowing the NPPOs to authorise laboratories other than NPPO laboratories to perform official plant pest diagnostics. The document is based on a NAPPO Standard (RSPM 9 Authorization of Laboratories for Phytosanitary testing). The Panel agreed to send the Standard to NPPOs to gather some preliminary comments as the guidelines include obligations for NPPOs.

An Expert Working Group will be convened in 2015 to prepare guidelines describing the tasks of National Reference Laboratories.

The Euphresco network, hosted within EPPO since June 2014 was presented, with a special focus on the funding activities that have started and the possibility for scientists to inform Euphresco national representatives on topics of interest was discussed. An update on the current situation concerning a request for EPPO to host Q-bank was also presented.