18th Meeting of the EPPO Panel on Diagnostics in Bacteriology

The Panel meeting was hosted by the National Plant Protection Organization (NPPO, NL), part of the Netherlands Food and Consumer Product Safety Authority (NVWA). The Panel continued its task of developing diagnostic protocols for regulated bacterial plant diseases, and was followed by a meeting of the European Association of Phytobacteriologists (EAP). 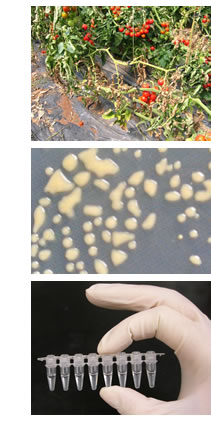 The Panel was informed about the outcomes of recent EPPO meetings and Workshops of relevance to diagnostics in Bacteriology including the EPPO Workshop on setting cut-off values for real-time PCR and the subsequent modifications to the instructions for authors of diagnostic protocols, the EPPO Workshop on Accreditation of plant pest diagnostic laboratories and the succeeding discussions with the European cooperation for Accreditation (EA) on the requirements for participation in proficiency testing for accreditation and how a harmonized approach to flexible scope can be implemented in the EPPO region. The Panel was informed that EPPO will host the EUPHRESCO Secretariat from April 2014 and about the status of the request made to EPPO to host Q-bank database. The Q-collect project, for which EPPO is a partner, was presented and Panel members were asked to provide information on collections in their countries.

The Panel was very pleased to welcome experts from outside the Panel who gave presentations on the various topics on the agenda of the meeting. Mr van de Vossenberg (NPPO, NL) presented the status of the EPPO Horizontal Standard on DNA barcoding as an identification tool for regulated plant pests and the test performance studies on the barcoding protocols. Ms Bruinsma (NAKT, NL) and Mr Koenraadt (NAKT, NL), partners in the TESTA project, presented the state of the art of their research which form the basis for a new EPPO protocol on Acidovorax citrulli and be used during the revision of the protocol on Clavibacter michiganensis subsp. michiganensis. In addition, the Panel was very grateful to Mr Boscia (CNR, IT) who presented the latest information on the Xylella fastidiosa outbreak in olive groves in Italy during the EAP part of the meeting.

New pest-specific diagnostic protocols
The Panel finalised the new protocols on Pseudomonas syringae pv. actinidiae and on ‘Candidatus Liberibacter africanus’, ‘Candidatus Liberibacter americanus’ and ‘CandidatusLiberibacter asiaticus’ to be presented to the Working Party on Phytosanitary Regulations in June 2014 and then to the EPPO Executive Committee and Council in September 2014 for final approval.
The Panel reviewed the protocol on Xanthomonas axonopodis pv. allii and agreed with the author’s suggestion that a triplex real-time PCR test should be added. A new version of this protocol adding this and taking into account the Panel’s comments will be prepared before the Panel on Diagnostics and Quality Assurance in November 2014. As mentioned above the protocol on Acidovorax citrulli will be prepared in the TESTA project framework and the progress so far was presented by guest speakers from NAKT and by Mr Stefani.
The Panel agreed that a diagnostic protocol should be prepared on ‘Candidatus Liberibacter solanacearum’. This will be drafted before the Panel on Diagnostics and Quality Assurance in November 2014.

The Panel reviewed the revision of the protocol on Pantoea stewartii subsp. stewartii and agreed that once the comments made are addressed this revised protocol should be sent for country consultation. The Panel reviewed a document describing the new tests (and the existing tests) that are available for Ralstonia solanacearum. It was agreed that a new version of this protocol should be prepared before the Panel on Diagnostics and Quality Assurance in November 2014 to add several of these new tests. Due to limited time during the meeting data will be collected by e-mail reviewing the document on new tests for Clavibacter michiganensis subsp. sepedonicus. As mentioned above the protocol on Clavibacter michiganensis subsp. michiganensis will be prepared in the TESTA project framework and the progress so far was presented by a guest speaker from NAKT. The Panel agreed that the revision will include spiking as a required control and that data from the interlaboratory comparison can be added.

The Panel members visited the National Plant Protection Organisation Laboratories. The next meeting of the Panel on Diagnostics in Bacteriology will be held in October 2015.