The 12th Workshop on EPPO Diagnostic Protocols for fungi took place in Valencia, Spain at the kind invitation of the Instituto Agroforestal Mediterráneo, Universitat Politècnica de València. The meeting was held back to back with the 16th Annual Meeting of the European Mycological Network (EMN). Thirty-three participants attended from 19 countries. 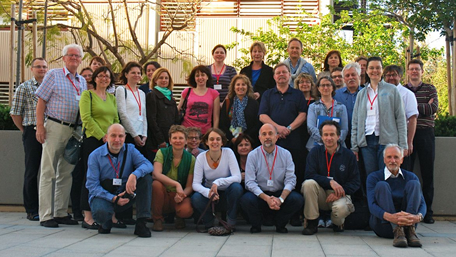 Phytophthora lateralis
The first draft of a diagnostic protocol for Phytophthora lateralis was reviewed. The author Ms Schenck will aim to add an Appendix on real-time PCR by September 2013 and then this protocol will be sent for country consultation. Comments received could then be reviewed by the Panel on Diagnostics and Quality Assurance in November 2013 for a possible adoption in 2014.

EMN members identified specific needs for revision according to the new procedure put into place for annual review of protocols.

Mycosphaerella dearnessii & Mycosphaerella pini
A draft revision of this protocol was prepared by Mr Ioos (Anses, FR) to include conventional and real-time PCR as described in Ioos et al., 2010 and by Mr Cech to provide information on Mycosphaerella gibsonii. The EMN reviewed the revised protocol and agreed with Mr Cech’s suggestion to include a section on M. gibsonii in the revision.

Ceratocystis fimbriata f. sp. platani
This protocol was revised by Mr Pilotti (CRA-PAV, IT) to include a real-time PCR test, to modify the species name (now Ceratocystis platani) and to add additional information. The EMN reviewed the new version. The EPPO Secretariat, Ms Schenk and Mr Heungens will continue to work with the author to finalize this revision and clarify the flow diagram.

Protocols on Guignardia citricarpa and on Gremmeniella abietina
New information on these 2 pests (concerning new populations and the taxonomy requiring clarification) was presented. This will be followed up by the members of the EMN in terms of future updates for these 2 protocols.

The EMN was informed of the latest developments concerning the EPPO Panel on Diagnostics and Quality Assurance, in particular on the revision of the horizontal standard on test-performance studies and proficiency testing, on the collection of validation data and on the planned revision of the EPPO standard PM 7/98 on Specific requirements for laboratories preparing for accreditation for a plant pest diagnostic activity. For this latter Standard a small group of EMN members reviewed the new draft appendix on validation of morphological tests. In general this proposed appendix was approved but the group preferred a slight reordering of the draft document and requested that the list of publications should be stated to be ‘preferably including original articles’.

Warm thanks are due to the hosts at the Universitat Politècnica de València, and in particular Ms Perez Sierra, for the excellent organization of the meeting. The next meeting will be held in Budapest on 2014-05-06/09.