Expert Working Group for performing a PRA on Parthenium hysterophorus 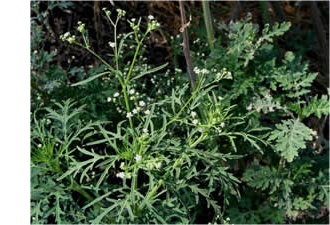 btropics of North and South America. Within the EPPO region, the species is so far only officially recorded in Israel. P. hysterophorus is reported as a weed in pastures and in several crops (e.g. cereals, vegetables, alfalfa, clover, sugarcane, orchards). For example, in Ethiopia, the yield in Sorghum bicolor grain was reduced by 40% to 97% when P. hysterophorus was left uncontrolled throughout the season. Frequent contact with the plant or its pollen can produce serious allergic reactions such as dermatitis, hay fever and asthma in humans, but also in livestock.

The species was added to the EPPO Alert List in 2012. The Working Party on Phytosanitary Regulations decided in June 2012 that a PRA should be performed for this species. An Expert Working Group on P. hysterophorus met in Paris in 2013-07-02/05 to perform a Pest Risk Analysis (PRA), on the basis of the hundreds of scientific publications available on the species. The overall conclusion of the PRA was that, if the pest spreads further in the EPPO region, it would be likely to establish in the EPPO Mediterranean countries and result in economic damage.

P. hysterophorus is native in North and South America, and als 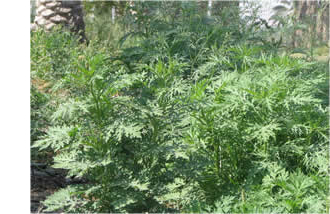 o occurs in Africa, Asia and Oceania where it is considered very invasive.

Its overall likelihood of entry in further countries within the EPPO region is considered to be moderate. The main pathway for entry is as a contaminant on used machinery, but the species may also enter as a contaminant of grain, seeds, growing medium adhering to plants for planting, or on shoes and clothes of travellers.

A climatic projection was undertaken with CLIMEX. Although P. hysterophorus is mainly present in tropical areas (e.g. in India, in Queensland (Australia)), the species is considered to be able to establish in the Mediterranean area, as well as in some temperate areas, and in glasshouses. The probability of establishment in the EPPO region is therefore considered as high.

The magnitude of spread was estimated to be high, in particular as the species spreads through human assistance as a contaminant of seeds, grain, shoes and clothes, compost, soil, vehicles, fodder,  etc.

Although P. hysterophorus is an important weed in many crops it is expected to have a moderate effect on yield and quality of cultivated plants as the intensive production techniques in the EPPO region are expected to lower its impacts. However, social impacts are expected to be major. P. hysterophorus provokes rhinitis, allergic eczematous contact dermatitis which may be particularly detrimental as cross-sensitivity has been demonstrated between P. hysterophorus and ragweeds (Ambrosia spp.) in both American and Indian patients. Furthermore, the plant has negative impacts on livestock with reports of serious impacts on the health of animals.

The overall uncertainty for this species is considered to be medium and mainly relates to the time scale for arrival and spread of the species, and the potential negative indirect effects if pollen of P. hysterophorus was to deposit upon floral stigmatic surfaces and interfere with the reproduction of fruit species in the Mediterranean such as olive and grapes, as has been observed elsewhere on other fruits.
Owing to the ability of the plant to produce a huge number of seeds in a short period, both eradication and containment are unlikely to be successful.

P. hysterophorus’ main impact is on human health, with impacts on yield and quality of cultivated plants being moderate. Before undertaking a detailed study on the management options related to the various pathways of entry, the Panel on Phytosanitary Measures will be consulted to obtain its advice on whether such species represents a priority for action for National Plant Protection Organizations.