Expert Working Group for performing a PRA  on Neoleucinodes elegantalis

Neoleucinodes elegantalis is a Lepidopteran fruit-borer currently present only in some countries of South, Central and No 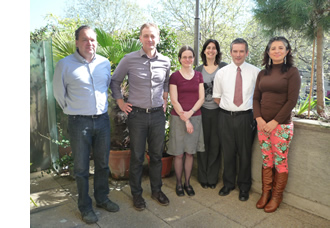 rth America, and the Caribbean. In several countries, including Brazil, Colombia, Honduras and Venezuela, it is reported as a major pest of several solanaceous fruit crops (tomato, eggplant, sweet pepper, tamarillo…). Although no introduction is reported outside of the Americas and the Caribbean, N. elegantalis is known to be associated with international trade because of numerous records of interception from the USA and the Netherlands.

This pest was added to the EPPO Alert List in 2012. The Working Party on Phytosanitary Regulations decided in June 2012 that a PRA for this species should be performed.

An Expert Working Group on N. elegantalis met in Paris in 2013-04-23/26 to develop a PRA. This PRA uses or refers to elements in other recent PRAs, especially those for three Lepidopteran pests of tomato or eggplant: the related-species Leucinodes orbonalis, as well as Keiferia lycopersicella and Tuta absoluta. The overall conclusion of the PRA was that, if the pest enters in the PRA area, it would be likely to establish in the EPPO Mediterranean countries (as well as in glasshouses throughout the PRA area), spread and result in economic damage.

N. elegantalis occurs in South, Central and North America, and the Caribbean. It is considered as a major pest in some countries.

The likelihood of entry is considered as low, although it might increase if trade volumes increase. The likelihood of entry was rated moderate in the cases where imported fruit are packed and handled in facilities situated close to production areas in the EPPO region. The main pathways for entry are fruit of host species in trade or with passengers, packaging, and plants for planting (with soil and/or fruit).

The magnitude of spread is considered to be high in the absence of control of movement of host fruit, and packaging material which has carried host fruit.

The pest is expected to have a moderate economic impact e.g. on fruit production, exports and possibly on seed production. The damage is caused by larvae that feed inside the fruit: the attacked fruit cannot be sold and the production is also seriously affected. However, the uncertainty of the possible impact is moderate as the pest is present in some countries without any published reports of severe damage (e.g. in the Caribbean). There seems to be variation in the damage potential in different areas and on different hosts.  Where it is introduced, the pest is likely to cause some losses, at least until control methods are added to the current integrated management programmes in the crops concerned. Eradication or containment in the EPPO region will be difficult and costly, and unlikely to be successful other than in glasshouses. Phytosanitary measures have therefore been considered for the commodity pathways identified.

The following management options were considered for host fruit from countries where N. elegantalis occurs: pest-free area or pest-free place of production for N. elegantalis, or a systems approach combining growing under screenhouse, monitoring with pheromone traps and treatment of the crop, visual inspection at the place of production and of the consignment, inspection and sorting of fruit during packing, and separation of trade and production flows and surveillance systems in the importing country. In all cases, only new packaging should be used at origin, and packaging should be destroyed or safely disposed of at import. Plants for planting should originate from a pest-free area or a pest-free place of production, or should have never borne fruit. In all cases, plants should be free from plant debris. The conclusions of the EWG will be reviewed by different bodies in the EPPO system in 2013-2014. This may then enable a recommendation for regulation to be considered by the EPPO Working Party on Phytosanitary Regulations in June 2014.