Expert Working Group for performing a PRA on Aromia bungii

In 2011, the presence of Aromia bungii was recorded for the first tim 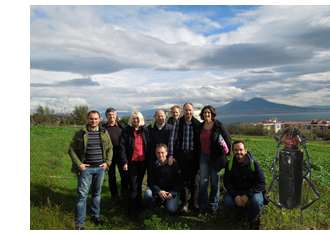 e in Germany. In 2012, its presence was also reported from Campania, Italy and in 2013 from Lombardia, Italy. In both countries, eradication measures have been taken. A. bungii has also been recently introduced in Japan. In addition, A. bungii has been intercepted in containers or in wood packaging material both in the EPPO region and in North America.

In June 2013, the Working Party in Phytosanitary Regulation agreed that a Pest Risk Analysis should be conducted on this pest. An Expert Working Group met in Napoli in 2013-11-11/15 to develop the PRA. A technical visit to 2 outbreak sites was also organized and the EWG could see the impressive damage caused by A. bungii in local orchards and the major efforts of the regional plant protection service to control it.

The overall conclusion of the PRA is that this pest is likely to establish and cause major damage in Prunus orchards in the EPPO region. Host plants are widespread in the EPPO region, both in commercial cultivation, in gardens, as amenity trees and in the wild and climatic conditions are favourable, in particular in the Southern part of the region. The pathway of entry is not clear as the import of Prunus plants for planting is prohibited in many countries (e.g. the EU) and the import of wood is limited. However the pest has already entered several times in the EPPO region. Phytosanitary measures to prevent further entry were recommended.

The conclusions of the EWG (in particular the recommended phytosanitary measures) will be reviewed by the relevant bodies in the EPPO system in 2014. This may then enable a recommendation for regulation to be considered by the EPPO Working Party in June 2014.