4th Meeting of the Panel on Diagnostics and Quality Assurance

The Panel met at the EPPO Headquarters and continued its task of developing diagnostic protocols for regulated pests. Altogether, 119 Diagnostic Protocols including 8 General Standards (also called Horizontal Standards) have now been approved and published and about 12 more are in different stages of preparation. 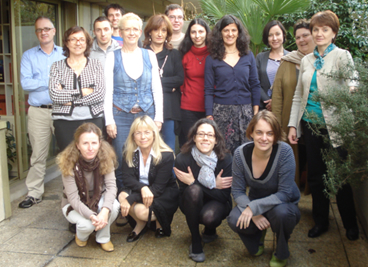 The Panel updated the instructions to authors of diagnostic protocols including the summary sheet of validation data. The recommendations from the EPPO Workshop on setting Ct cut-off values for real-time PCRwere presented and the conclusions from this Workshop were used to modify the relevant sections of the instructions for authors.

The Panel was informed about the IPPC Diagnostic Protocols which will be sent for country consultation in the next year and the procedure for preparation of a regional position.

The Panel was informed about the status of the ISO/CD 13484 Foodstuffs draft General requirements for molecular biology analysis for detection and identification of destructive organisms in plants and derived products, and the consultation process on this.

The Panel was informed that the EPPO Secretariat will host the EUPHRESCO network Secretariat from April 2014. Information was also provided about the request made to EPPO to host the Q-bank database.

EPPO’s involvement in the TESTA project and in Q-collect was briefly presented.

Mr Pasquerault, from the Entomology laboratory of the Forensic Science, Institute of the French Gendarmerie presented his work to the Panel. His laboratory has been accredited according to ISO 17025 since 2007 for morphological methods and his work has been extremely helpful in reaching a consensus in the approach to validation in Entomology. His interesting presentation and contributions to the work of the Panel were much appreciated.

Protocols ready to be sent for final approval (drafts are available on request):

The Panel addressed the remaining comments following country consultation on this new Standard on Huanglongbing. Ms Lopez IVIA, ES (author of this protocol) was thanked for her work on this Standard which was considered ready to be submitted for final approval.

The Panel addressed the remaining comments following country consultation on this new Standard. Mr Stephani, University of Modena, IT (author of this protocol) was thanked for his work on this Standard which was considered ready to be submitted for final approval.

The definitions in this protocol will be modified and a new definition will be added. This revision will be submitted for final approval.

Protocols on Spodoptera spp. and on Anastrepha obliqua will be presented at the next Panel on Diagnostics in Entomology. The revised protocol on Aleurocanthus spiniferus & A. woglumii which will have been sent for country consultation will also be reviewed on this occasion.

A new protocol on Phytophthora lateralis will have an appendix on real-time PCR added and be presented to the next joint EPPO and European Mycology Network meeting. Revised drafts of the following protocols will also be presented at that meeting: Phoma tracheiphila, Mycosphaerella dearnessii & Mycosphaerella pini, Ceratocystis fimbriata f. sp. platani and Plasmopara halstedii.

New protocols including a Generic Standard on the detection of pospiviroids, a Standard on Immunosorbant Electron Microscopy and a Standard on Andean potato latent virus and Andean potato mild mosaic virus are in preparation and will be presented at the Panel on Diagnostics in Phytoplasmology and Virology.

Quality assurance and accreditation
PM 7/98: Specific requirements for laboratories preparing accreditation for a plant pest diagnostic activity (revision)
The Panel went through the detailed comments on the different sections of the Standard. In addition the list of widely used tests prepared from the EPPO Survey was accepted for addition. The Panel agreed that this revised protocol can be sent for country consultation once a small number of changes and additions were made.

Guidelines for the organization of interlaboratory comparisons by plant pest diagnostic laboratories (new)
The Panel went through the comments received during country consultation and suggested modifications section by section. It was agreed that, once the 2 sections on statistical analysis were modified in line with the discussions held and checked, this Standard could be presented for final approval.

Standard on DNA barcoding as an identification tool for regulated plant pests
Mr van de Vossenberg updated the Panel on the progress made on this Standard which should be presented at the next meeting of the Panel.

Next meeting of the Panel on Diagnostics and Quality Assurance
The next Panel meeting will be held in Kleinmachnow (DE) on 2014-11-25/27 at the kind invitation of the German NPPO.