50th Meeting of the Working Party on Phytosanitary Regulations

The 50th meeting of the Working Party on Phytosanitary Regulations took place in Helsinki, on 2012-06-18/21 at the kind invitation of the NPPO of Finland. This EPPO Working Party directs and supervises the technical work of many EPPO Panels related to plant health.

The report of the meeting prepared for the EPPO Council and Executive Committee presents in greater detail the discussions, decisions and recommendations which were made by the Working Party; some of the major points are summarized here. 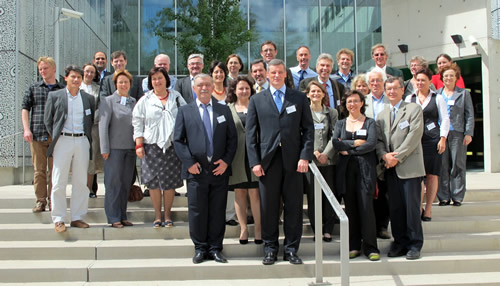 The following EPPO Standards were considered ready to be submitted for approval by Executive Committee and Council in September 2012:

Revision of PM 1/2, by addition of the following pests to the List of pests recommended for regulation:

In addition the Working Party agreed with the withdrawal of the following EPPO Standards:

These standards included mainly description of detection tests that are now part of the EPPO diagnostic protocols for the pests concerned (PM 7/42 and 7/20 respectively).

The Working Party was informed about subjects discussed by the Commission for Phytosanitary Measures, the Standards Committee, and the CPM Bureau. It discussed in particular the developments on electronic certification. The Working Party welcomed the organization of joint workshops with NEPPO (Near East Plant Protection Organization).

The first part of the EPPO Study on the risks of imports of plants for planting was finalized. The Working Party reviewed the draft EPPO Standard that includes a Decision-support scheme intended to be used by NPPOs to identify the need for a commodity PRA for imports of plants for planting from a given origin and considered that it should be sent for country consultation.

The Working Party reviewed the system established to perform PRAs in the EPPO region and made suggestions for improving the procedure. It discussed how to better involve members of the Panel on PRA Development in the review of EPPO PRAs.

The Working Party established a list of pests for which PRA should be performed or evaluated in 2012-2013. Expert Working Groups for PRA should be organized for Polygraphus proximus, Neoleucinodes elegantalis, Parthenium hysterophorus.

The Secretariat reported on the collaboration with EFSA.

Relationship between EPPO and other bodies

The Working Party supported the proposal that the EPPO Secretariat should provide the structures for a long-term sustainable network for EUPHRESCO, a European Research Area Network (ERA-NET) project for research policy development and implementation in the field of statutory and emerging plant pests, diseases and invasive species. The Working Party took note that the financial implications will be discussed further at the EPPO Council in September 2012.

The Working Party was presented a draft web interface allowing EPPO countries to make their pest reports to EPPO and possibly to other bodies such as the IPPC and the EU (if relevant). It recommended that the EPPO Secretariat should continue to develop this system to facilitate pest reporting by NPPOs.

The Working Party was informed of all standards being developed by the Organization. The Working Party decided that the work on phytosanitary treatments may only continue if member countries provide EPPO with appropriate draft standards. The Working Party also decided that NPPOs should be consulted to define priorities for the programme of the Panel on Phytosanitary Procedures as well as to define priorities in the revision of EPPO Standards in series PM 4 Production of Healthy Plants for Planting (this revision will focus on test methods).

The Working Party was presented with the work of the Secretariat on new tools of communication (Facebook, Twitter, Scoop.it).