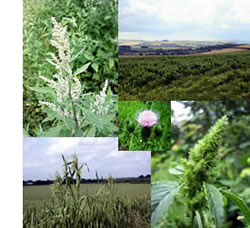 The EPPO Workshop on herbicide resistance analysis in the framework of zonal evaluation was organized in collaboration with the Julius Kühn-Institute (JKI) Braunschweig and held on 2012-10-23/25 at JKI in Berlin-Dahlem, Germany.

Special thanks are due to JKI who kindly accepted to host the most recent in a series of EPPO workshops held at JKI Berlin.  In particular to Ms Ulber and Mr Zwerger are thanked for the excellent organization of the meeting. The EPPO Secretariat would also like to thank the organizing committee who helped in structuring this workshop and assisted with finalizing the conclusions: Isabel Calha (PT), Ingrid den Hoed (GB), Per Kudsk (DK), Henning Nordmeyer (DE), Marisa Salas (EHRAC), Maurizio Sattin (IT), Lena Ulber (DE), Bernard Weickmans (BE), and Peter Zwerger (DE). 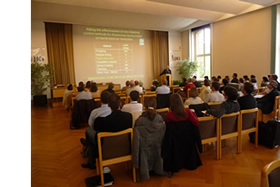 There were 56 participants from 15 EPPO countries (representing regulators, researchers, and academia), 8 agrochemical companies and 8 consultancy firms.

Herbicide resistance has become an increasingly significant problem in agriculture and in the framework of the new EC Regulation 1107/2009 (replacing 91/414/EEC), mutual recognition and zonal authorizations are core principles of dossier submission for the authorization of plant protection products. Many of the technical details for conducting zonal authorizations including resistance risk analysis still need to be harmonized among EPPO member countries.  The aim of the workshop was to bring together regulators, scientists and industry participants in order to better understand the present herbicide resistance situation in Europe, and to consider how to address resistance risk analysis across EU authorization zones.

A following series of lectures on resistance risk assessment in the context of zonal authorization were then presented :

On the second day the Workshop split into three Groups, the chairs rotated among groups in order take the participants through three steps of the EPPO Standard PP1/213 Resistance risk analysis using different scenarios:

In the final plenary session chaired and moderated by Per Kudsk (DK), the final summary of the conclusions of the three working groups were presented, discussed and actions proposed.

On the final day the rapporteurs of each group reported back to plenary session conclusions of their groups:

In the final plenary session chaired and moderated by Per Kudsk (DK), the final summary of the conclusions of the three working groups were presented, discussed and actions proposed.

In addition to the above, the EWRS (European Weed Research Society) Herbicide Resistance Working Group held its meeting in a separate morning session. The objective of the groups is to facilitate the effective management of herbicide resistance by fostering understanding, co-operation and communication between industry, government, academic and farmers.  The new chair Paul Neve thanked Anne Thompson for many years of chairing the Working Group and discussed ideas for forthcoming activities.