45th Meeting of the Panel on Phytosanitary Measures

The Panel met in Paris in the EPPO headquarters on 2012-03-13/15. The main task of this Panel is to evaluate risks presented by specific pests and design phytosanitary measures to avoid their introduction and spread.

On a case by case basis, the Panel reviewed PRAs prepared by the Expert Working Groups for PRA and performed pest risk management when necessary, and it also reviewed national PRAs. The Panel recommended to the Working Party the addition to the A1 List of ‘Candidatus Liberibacter psyllaurous' (solanaceous haplotypes) and its vector Bactericera cockerelli, Keiferia lycopersicella and Leucinodes orbonalis; and the addition to the A2 List of Pseudomonas syringae pv. actinidiae and Pepino mosaic virus.

The Panel reviewed the present situation of A1 pests and recommended the transfer from the A1 to the A2 List of Maconellicoccus hirsutus andTrioza erytreae.

The Panel reviewed the EPPO Alert List whose purpose is to warn countries about possible new risks, and in certain cases to propose candidates for PRA and eventually regulation. Considering that the alert had been given and that no further action was needed, the Panel decided to delete Psacothea hilaris, Melampsora euphorbiae, and Spiroplasma kunkelii. The Panel suggested emerging pests that could be added to the Alert List (e.g. Neoleucinodes elegantalis, Cylas formicarius, Agrilus auroguttatus, Aromia bungii, Thaumastocoris peregrinus, Batocera rubus). 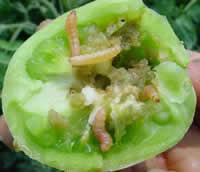 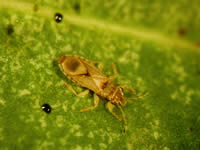 The Panel agreed on a simplified scheme for Express PRA for assessing the risk when a new outbreak is found in a country, or when repeated interceptions are made on imported consignments. This draft standard was sent for country consultation.

The Panel continued to review the Decision-support scheme for prioritizing action during outbreaks which was first prepared in the framework of PRATIQUE. It is expected that this draft standard will be finalized at the next Panel meeting.

In addition to the review of PRAs (see above) the Panel established the priorities for the organization of EWGs for PRA. The selection was made taking into account the following elements: geographical distribution, importance of the crop(s) concerned, risk of natural spread into the region or for further spread within the region, potential pathways, economic impact, environmental impact, possibilities of control, similarities to other known cases, availability and validity of data. Polygraphus proximus was considered as having a high priority. The Panel also agreed that a second meeting on risk management for Phytophthora kernoviae andPhytophthora ramorum, as well as onThaumatotibia leucotreta should be organized.

EPPO Study on the Risk of Imports of Plants for Planting

The Panel agreed that the final version of the EPPO Study should be posted on the EPPO website as a technical document. It discussed in detail the draft standard prepared by an Expert working group in December 2011, which includes a screening process. It was agreed that draft standard should be presented to the Working Party in June 2012.
The next meeting is planned in Switzerland on 2012-10-03/04.