8th Meeting of the Panel on Diagnostics in Nematology

The Panel on Diagnostics in Nematology met at the EPPO Headquarters. The Panel continued its work on the prepa 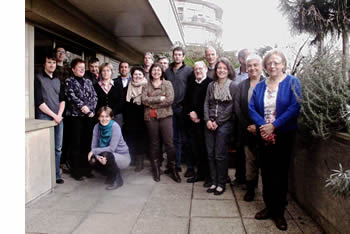 The Panel worked on the new draft Horizontal Standard on Extraction procedures for nematodes. Comments were collected from the Panel and it was agreed that the author would provide a new version to be circulated to the Panel for further review. The Panel agreed that the draft could be made available early (marked as a draft standard).
Revisions of the protocols for Bursaphelenchus xylophilus and Globodera rostochiensis & pallida were considered during the Panel meeting:

The Panel was informed of the latest developments concerning the EPPO Panel on Diagnostics and Quality Assurance, in particular on progress on the horizontal standard on test-performance studies and proficiency testing, on the collection of validation data and on the planned revision of the EPPO standard PM 7/98 on Specific requirements for laboratories preparing for accreditation for a plant pest diagnostic activity.