3rd Meeting of the Panel on Diagnostics and Quality Assurance

The Panel meeting was hosted by the State Plant Health and Seed Inspection Service (Polish NPPO) in Warsaw. The Panel continued its task of developing diagnostic protocols for regulated pests. Altogether, 113 Diagnostic Protocols including 7 general standards have now been approved and published and about 10 more are in different stages of preparation.

The Panel discussed how to improve the process for the preparation of a regional position on IPPC diagnostic protocols sent for country consultation. The Panel reviewed the instructions to authors in particular the Appendix on the minimum information to be included in the description of a PCR test. The section on the controls and the interpretation of the results of a test were modified. A new version is now posted on the EPPO website in the section “Standards”. The Panel was informed about the requests made to EPPO to host EUPHRESCO Secretariat and the Q-bank database from 2014 onwards. 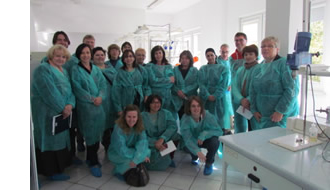 Protocols ready to be sent for country consultation

The Panel reviewed the new protocols on Pseudomonas syringae pv. actinidiae, 'Candidatus Liberibacter' and a revision of Pantoea stewartii (PM 7/060). Suggestions made will be presented at the Panel on Diagnostics in Bacteriology (November 2012). The Panel considered that the revision of the Diagnostic Protocol on Synchytrium endobioticum (PM 7/028) should be postponed until the results of two international research projects are available (EUPHRESCO project SENDO and CORNET).

Two IPPC Diagnostic Protocols on Plum pox virus and Trogoderma granarium were adopted in 2012 and revisions of EPPO protocols (PM 7/032 and PM 7/013 respectively) to align them with the IPPC protocols are expected in 2013. An IPPC Diagnostic Protocol on Potato spindle tuber viroid is in preparation; the revision of the EPPO protocol will be initiated once the IPPC protocol is finalized.

Horizontal standard on extraction procedures for nematodes
A draft is being finalised and will be sent for country consultation in early 2013. The Standard will be made available as a draft on the EPPO website before publication.

A first draft developed by a small Expert Working Group was presented to the Panel and comments were gathered. The Panel noted the difficulties which arose with the preparation of the sections on testing for homogeneity and stability of the samples and on statistical analysis to analyse interlaboratory comparison results. It was suggested that the survey on PT/TPS should be prolonged up to the 15th of January to gather more information on how laboratories address these issues. The EWG will continue to work on this Standard at a further meeting in February 2013 to finalize the document and possibly send it for country consultation.

Elaboration of the list of tests widely used in the region

A first list of widely used tests has been produced based on the results of the survey in the summer of 2008 but the Panel suggested that this survey should be repeated in 2013.

A new section of the EPPO database on diagnostic expertise called 'validation data for diagnostic tests' was presented. This section includes validation data generated by various official laboratories in the EPPO region. Suggestions for improvement were made which were implemented after the meeting and this section was made open access in December 2012.

The Panel was one of the first to test the new system established for distribution of documents to be reviewed during Panel meetings and allowing discussion fora. The Panel members were very positive about this new system and found it easy to use. The new webpage on EPPO Activities on Diagnostics and the new web magazines created by the EPPO Secretariat in particular the one on Diagnostics were presented. The Panel welcomed these initiatives.

The Panel had the opportunity to make an interesting visit to the Voivodeship laboratory of Warszawa-Wesola. During this visit the organization of the official diagnostic activities was presented. In Poland official plant pest diagnostic activities are conducted by a Central Laboratory (located in Torun) and 16 regional laboratories called “Voivodeship laboratories”. These regional laboratories perform most of the routine tests that need to be carried out in the framework of official inspections. Nine laboratories in Poland are accredited (including the laboratory visited by the Panel). The laboratory of Warszawa-Wesola was in the middle of the testing campaign of potato tubers for Ralstonia solanacearum and Clavibacter michigansesis subsp. sepedonicus. It also performs testing for Potato cyst nematodes and Synchytrium endobioticum.

The next meeting of the Panel on Diagnostics and Quality Assurance will be held in Paris. The dates are 2013-11-11/15.