In 2010 an EU collaborative project Q-DETECT was set up. The objective of the project is to develop simple, user-friendly and robust methods for detection and monitoring of quarantine pests by inspection services. In the framework of the project it was agreed that two workshops for inspectors would be organized jointly with EPPO in 2011 and 2012 in order to present and demonstrate the tools developed and to gather feedback from potential users of these tools.

The first EPPO Q-Detect Workshop for Phytosanitary Inspectors took place in Padova, Italy at the kind invitation of the Italian NPPO and the University of Padova. More than 50 participants from 21 countries participated. 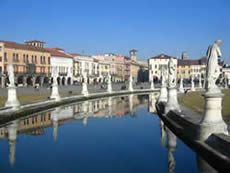 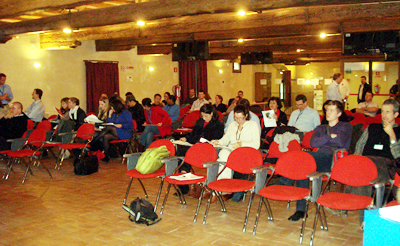 The Workshop was organized as a series of lectures presenting the different tools developed by the relevant Q-DETECT partners. It was followed by practical sessions in small groups where the inspectors could test some of the tools. Warm thanks are due to the local organizers and to Kelvin Hughes (Fera, GB) for his excellent chairing of the meeting.

View two general introductions to the Workshop and Q-DETECT project:

Presentations on specific tools can be viewed below with a short summary:

Inspection processes performed by National Plant Protection Organisations (NPPOs) have been described and modelled in close cooperation with inspectors. The objective of the Inspection Model is to evaluate the cost-effectiveness of the different inspection scenarios (including reduced frequency of inspection, effect of changes in sampling/or detection methods and protocols, places of inspection). A prototype of a Trap Model was also presented. The objective of this model is to identify the best location and optimal number of traps for surveillance in a glass house or a forest.

In order to achieve early detection of pests there is a strong need to provide and improve methods to be used in surveillance by NPPOs. Establishing efficient trapping systems could improve the detection capacity that is currently limited by the amount of the commodities that can be inspected with traditional methods. In the framework of the Q-detect project, trap design (density, automation, lures and combination of lures) were investigated for a few of the most important target insects e.g. Coleoptera (wood beetles) and Aleyrodidae (whiteflies). Traps were deployed at ports of entry but also in natural conditions (e.g. forests) to validate the techniques. It was shown that the multi-lure approach associated with trap designs specific to the target organisms is the most suitable for use at ports of entry and the most successful in detecting alien species under both indoor and outdoor conditions, in addition manpower costs for such traps are lower compared to several traps each with a different lure. An automatic trap, which registers catches of insects with a video camera is also being developed and will be tested in the remaining part of the project.

An electronic nose (e-nose) is a device intended to detect in particular volatile organic compounds (VOC). It is well documented that in response to infection, plants and fruits release bouquets of biologically active VOC. In the framework of the Q-Detect project, the use of e-nose based on released VOCs was investigated for the detection of plants of Malus and Pyrus inoculated with Erwinia amylovora (fire blight). The e-nose successfully recognized infected asymptomatic plants from three days after the infection. The e-nose was also successfully used to discriminate between Malus plants inoculated with different pathogens (E. amylovoraand Pseudomonas syringae pv. syringae). The project aims to apply the e-nose technology to the diagnosis of plant diseases in asymptomatic hosts, such as dormant nursery material. Future challenges will include 1) setting of the minimal volatile threshold for a reliable recognition, 2) use of remote VOCs-trapping probes, and 3) constitution of an olfactory data-base.

Acoustic detection is essential when searching for wood-boring insects. These insects produce vibrations with any activity that involves movement, in particular biting or chewing, none of which can be detected unaided by the human ear. With improving technology, wood-boring insects can be heard above background noise. Q-DETECT aims to investigate alternatives to conventional methods by examining non-contact laser vibrometry, thus eliminating the effects of environmental conditions that adversely affect the equipment. Anoplophora glabripennis, Rhynchophorus ferrugineus and Monochamus spp. were selected as target species for acoustic detection and monitoring investigations. Substrate-borne and airborne sound recording techniques were tested on standing trees during field visits and samples of cut trees were also taken for further investigation. The equipment was also checked during the different tests and as a result, the choice was made to use different Panasonic microphones with more specific capacity. It was noted that it is important to gather as many recordings as possible to help in establishing species specificity of sounds and sound databases.

When viewed through the near infrared spectrum, thriving vegetation appears reflective because of the scattering that takes place between the spongy mesophyll cells of the plant. A diseased leaf is less reflective in this range, so diseased crops can be clearly identified. In the framework of the project, a comprehensive review was made of the potential for different remote sensing platforms to be used to detect the spread of disease. A robust spectroscopic technique has been developed to remove sample inhomogeneity from reflective spectrum. This technique has been applied to a study of Phytophthora ramorum infection in larch. A database of mid-infrared spectra have been collected for healthy larch tree pine needles, measured under different stress conditions. The final aspect of the imaging work is the development of an automated pattern recognition technique to process high resolution satellite imagery.

Methods based on nucleic acid detection, enabling on-site detection and identification of quarantine pests are being developed in the framework of Q-Detect. DNA/RNA extractions on different substrates to be performed in the field and/or on‐site were investigated and compared (White flies viruses from insects caught in traps, Bacterial pathogens from plant material, Potato pathogens from tuber and leaves). To enable on‐site detection, isothermal methods preferably in one reaction mixture are developed. Different methods have been optimized for species‐specific, fast and affordable on‐site DNA or RNA detection in combination with portable detection platforms. Loop mediated isothermal amplification (LAMP) was described. LAMP is a single tube technique for the amplification of DNA. This may be of use in future as a low cost alternative to detect certain pests as there would no longer be a need for expensive thermocyclers as in conventional PCR. LAMP primer-sets for the detection of the whitefly transmitted Criniviruses, Tomato chlorosis virus (TOCV), Tomato infectious chlorosis virus (TICV), Potato yellow vein virus (PYVV) and the Begomovirus Tomato yellow leaf curl virus (TYLCV) have been developed as well as LAMP procedures for the detection of the bacteria Xanthomonas arboricola pv. pruni, Erwinia amylovora, Ralstonia solanacearum and Potato spindle tuber viroid (PSTVd). An evaluation of the LAMP technology was successfully performed on‐site at Zürich Airport for detecting Thrips palmi in orchids.

The field-based techonologies that are currently being used or under development in the United Kingdom were presented. Particular emphasis was given to the benefits and the practical limitations of the lateral flow devices. The results of trials conducted in 2011 on the acoustic detection of Anoplophora chinensis were presented to the participants.

The newly released EPPO Database PQR was presented to the Workshop. This database provides information on the geographical distribution and host plants of regulated pests.

The EPPO Standards which present a particular interest to phytosanitary inspectors were presented to the Workshop.

Practical sessions were organized on the following tools 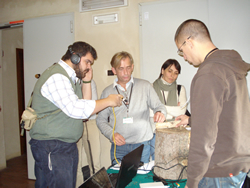 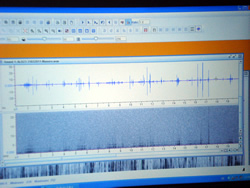 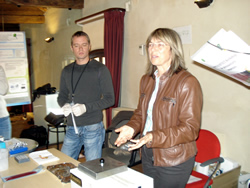 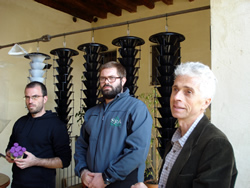 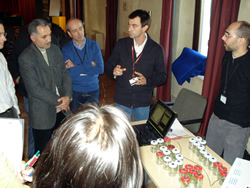 After the practical sessions it appeared that from the perspective of inspectors, some technologies have more immediate field potential than others.

It was noted that modeling inspection was not considered to be applicable for use by frontline inspectors but may have potential use for managers and decision makers.

It was also recommended that further testing should be done in “real life” inspection point conditions in particular for the e-nose.

An online questionnaire was established after the meeting to allow participants to provide further feedback for the members of the Q-Detect project.