17th Meeting of the Panel on Phytosanitary Measures for Potato

The Panel on Phytosanitary Measures for Potato held its 17th meeting in Paris, in the new EPPO Headquarters on 2011-03-08/10. As agreed at the previous panel meeting a one-day workshop on Meloidogyne species (M. chitwoodi and fallax) was organized before the Panel meeting. Several nematologists and experts involved in the pest assessment or management kindly joined the meeting to share their knowledge and discuss current issues on these nematodes.

The objectives of the workshop were to: 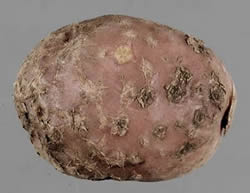 Symptoms of Meloidogyne fallax on potato

The Panel found the exchange of experience very useful, in particular in relation with outbreak management in different countries. A summary of the workshop as well as an article describing eradication and containment measures will be prepared for publication in the EPPO Bulletin. The Panel will also elaborate a draft regulatory control system based on these experiences.  Finally, the Panel agreed that the datasheets on M. chitwoodi and M. fallax should be updated on the basis on the work done within the EFSA project Prima Phacie.

The Panel reviewed the comments received after country consultation on the following standards:

The Panel amended the draft standards to take into account the comments. The amended versions will be presented to the Working Party for phytosanitary regulations for approval.

The Panel discussed the recent progress on the harmonization of tests to assess the resistance of potato cultivars to the different pathotypes of Synchytrium endobioticum. The Panel considered that it was still needed to harmonize the scoring system, in particular for borderline reactions. It agreed that a one-day workshop on potato wart disease, similar to the one organized on Meloidogyne species would be useful. A programme will be elaborated for next year.

Emerging pests: the Panel was presented with the outcome of the draft PRA for 'Candidatus Liberibacter solanacearum', and its vector Bactericera cockerelli.