44th Meeting of the Panel on Phytosanitary Measures

The Panel met in Paris in the EPPO headquarters on 2011-11-08/09 as it was agreed that the Panel will now meet twice a year to be able to better cope with its very heavy agenda. The main task of this Panel is to evaluate risks presented by specific pests and design phytosanitary measures to avoid their introduction and spread. 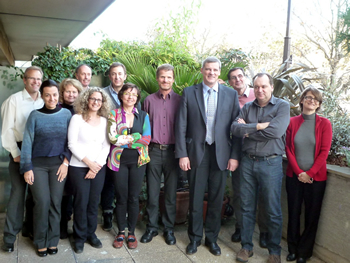 The Panel reviewed the PRA prepared by the Expert Working Group on Pseudomonas syringae pv. actinidiae and considered in particular the managements options.It also reviewed measures for pests for which national (or EU) PRAs exist such as Pepino mosaic virus, Phytophthora kernoviae, Phytophthora ramorum and Leucinodes orbonalis. The Panel agreed that these pests should be recommended for addition to the EPPO A1 and A2 Lists but measures will be reconsidered at the next Panel meeting.

The Panel reviewed the EPPO Alert List whose purpose is to warn countries about possible new risks, and in certain cases to propose candidates for PRA and eventually regulation. The Panel was informed on pests identified by the Secretariat and suggested emerging pests that could be added to the Alert List (e.g. Agrilus auroguttatus (syn. A. coxalis), Cylas formicarius).

The Panel considered the Decision-support scheme for generating contingency plans and prioritizing action during outbreaks produced in the framework of the EU project PRATIQUE and reviewed it so that it may become an EPPO Standard.

In addition to the review of PRAs (see above) the Panel established the priorities for the organization of EWGs for PRA. Oemona hirta was considered as having a high priority. The Panel also agreed that a short EWG should be organized to recommend final management measures for P. ramorum and P. kernoviae.

Future of the Panel on Phytosanitary Procedures

The Panel discussed how an efficient work can be conducted by EPPO on phytosanitary procedures. It suggested that a new system, involving a core group of experts and ad hoc experts on specific topics will be more efficient than a normal Panel. This issue will be further discussed by the Working Party on Phytosanitary Regulations.