43rd Meeting of the Panel on Phytosanitary Measures

The Panel met in Paris in the new EPPO headquarters on 2011-04-05/08. The main task of this Panel is to evaluate risks presented by specific pests and design phytosanitary measures to avoid their introduction and spread.

On a case by case basis, the Panel reviewed PRAs prepared by the Expert Working Groups for PRA and performed pest risk management when necessary, and it also reviewed national PRAs. The Panel recommended to the Working Party the addition of Agrilus anxius to the A1 List, and of Drosophila suzukii to the A2 List. It considered that Diocalandra frumenti should not be recommended for regulation. The Panel finalized pest risk management for Epitrix species for host plants for planting, and discussed options for the management of Pepino mosaic virus and Leucinodes orbonalis.

The Panel reviewed the present situation of A1 pests and recommended the transfer from the A1 to the A2 List of Epitrix cucumeris, Phytophthora lateralis and Squash leaf virus. The Panel reviewed the Action List and agreed that the following pests should be withdrawn as they have been on the Action List for more than 5 years (but they will remain on the A1/A2 Lists): Sirococcus clavigignenti-juglandacearum, Dendrolimus superans, Lymantria mathura, Strobilomyia viaria, Tuta absoluta. 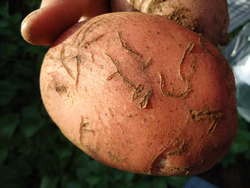 The Panel reviewed the EPPO Alert List whose purpose is to warn countries about possible new risks, and in certain cases to propose candidates for PRA and eventually regulation. Considering that the alert had been given and that no further action was needed, the Panel decided to delete Diaphania perspectalis and Iris yellow spot virus. The Panel suggested emerging pests that could be added to the Alert List (e.g. Apriona species (A. japonica, A. germari, and A. cinerea), Diaphania indica, Glyphodes pyloalis, Hosta Virus X, maize redness, Trichodorus cedarus, Heterodera zeae).

The Panel considered documents and tools produced in the framework of the EU project PRATIQUE and made comments on them. It also agreed on a simplified scheme for “express” PRA for assessing the risk when a new outbreak is found in a country, or when repeated interceptions are made on imported consignments.

In addition to the review of PRAs (see above) the Panel established the priorities for the organization of EWGs for PRA. The selection was made taking into account the following elements: geographical distribution, importance of the crop(s) concerned, risk of natural spread into the region or for further spread within the region, potential pathways, economic impact, environmental impact, possibilities of control, similarities to other known cases, availability and validity of data. The following pests were considered as having a high priority: Thaumatotibia leucotreta, Keiferia lycopersicella, Apriona species, Oemonia hirta, Meloidogyne ethiopica.

Following a recommendation of the Working Party, the Panel agreed on a template for pest reports, which should help further harmonization of pest reporting between EPPO countries. This document was sent for country consultation as a standard is series PM1.

The Panel reviewed the first draft of the EPPO Study. This work was initiated as a follow-up of the EPPO Council Colloquium in 2009: Improving the plant health system. It discussed in detail the criteria proposed to develop a pre-screening process to identify higher risk commodities. It recommended that the pre-screening process should be further elaborated and tested by an expert working group.

The Panel was presented with the new version of PQR (Plant Quarantine data Retrieval system). The NPPOs will be given two months to review the content of the database, before it is made publicly available on EPPO website.

Finally, the Panel agreed to meet twice a year to be able to better cope with its very heavy agenda. The next meeting is planned for 2011-11-08/09 in Paris, but the regular date would probably be on the 1st week of October.