Expert Working Group for performing a PRA
on Keiferia lycopersicella

Keiferia lycopersicella, the tomato pinworm, came to EPPO’s attention because it was detected in 2008 damaging a tomato crop in Italy (Ligur 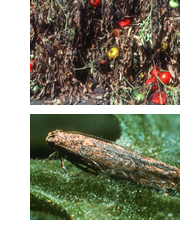 ia). K. lycopersicella originates from the Americas (probably Central America) where it is considered as a significant pest of tomato (and sometimes eggplant). It was then considered as eradicated but this incursion showed that a pathway for entry existed to the EPPO region. As this pest has quite a similar profile to Tuta absoluta, whose recent establishment had disastrous consequences on tomato production in the EPPO region, it was added to the EPPO Alert List in November 2010. The Working Party on Phytosanitary Regulations decided in June 2011 that a PRA for this species should be performed.

An Expert Working Group on K. lycopersicella met in Paris in 2011-09-19/22 to develop a PRA. The overall conclusion of the PRA was that, if the pest enters in the PRA area, it would be likely to establish in the EPPO Mediterranean countries (as well as in glasshouses throughout the PRA area), spread and result in economic damage.

K. lycopersicella occurs in North, Central and South America, as well as in the Caribbean. The risk of entry into the EPPO region was rated high to moderate. The most risky pathway is via fruit of tomato with vine, and the worst case scenario would be that they are packed in a place where tomato is also grown in the Mediterranean Basin. The volume of this pathway is low but there has been a significant increase of imports of tomato fruit particularly from the Dominican Republic over the past 5 years. In most countries of the PRA area (including the EU), there is no compulsory inspection of fruit. Entry on material used to package tomato fruit was considered possible, if this material is destined to facilities where tomatoes are also grown.

Although there is no data available on trade volumes, the entry with plants for planting of tomato and eggplant is considered unlikely because import is forbidden in EU countries and potential volumes to other countries were considered very low.

The overall probability of establishment is high. The pest could establish in glasshouses throughout the PRA area and outdoors in the Mediterranean Basin where host plants are largely grown both outdoors and in protected cultivation.

The probability of spread is considered to be 'high' in the absence of control of movement of host plants and plant products, and packaging material which has carried these.

Economic impact is likely to be major in countries where T. absoluta is not present, but may be only moderate in areas where T. absoluta is already present as some management measures will mitigate the impact of K. lycopersicella too (e.g. the use of screenhouses). In any case, time will be needed before optimal control management strategies are developed and establishment of the pest will increase costs in terms of plant protection products, pheromones (for mating disruption), equipment, and labour.

The following management options were considered for both fruit of tomato and plants for planting from countries where K. lycopersicella occurs: pest-free area or pest-free place of production for K. lycopersicella, or a systems approach combining treatment of the crop, growing under screenhouse, pheromone traps, visual inspection at the place of production, handling and packing methods, visual inspection of the consignment.

In addition for tomato fruit, it was also considered that it may be possible to take only national measures in the importing country, but only in countries where K. lycopersicella cannot survive outdoors in winter. It would require the separation of trade and growing flows (separate facilities for imported consignments and growing tomato) and a good surveillance system (including trapping at packing stations).

The conclusions of the EWG will be reviewed by different bodies in the EPPO system in 2011-2012. This may then enable a recommendation for regulation to be considered by the EPPO Working Party on Phytosanitary Regulations in June 2012.