Expert Working Group for performing a PRA on Apriona germari,
A. japonica,
and A. cinerea 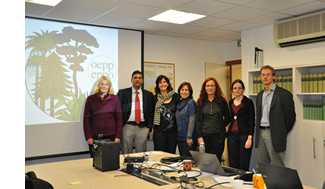 contains 35 species of medium to large longhorn beetles (Coleoptera: Cerambycidae) occurring in the east Asian and Indo-Pacific geographic regions. Three of these species, Apriona germari, A. japonica and A. cinerea are important pests of broadleaved trees in their native areas and are reported to cause significant economic damage. They have a wide host range (at least 70 plant species, mostly trees,in 21 different families) and many of their host species, or related species in the same genera, are important commercial, ornamental or forest trees in the EPPO region.

The interception of two Apriona larvae and an adult in the Netherlands in 2008 and 2009 prompted a review and the publication of a short PRA by the Dutch NPPO for A. germari, A. japonica and A. cinerea. This short PRA focussed on the probability of establishment of Apriona spp. in the Netherlands and concluded that the establishment of sustainable populations was highly unlikely and the economic impact would be at most incidental and local, because the climate of the Netherlands is much cooler than the climate of the native areas of the beetles, and this would hinder the beetles’ development and survival. However, it was considered that there may be a risk for the Mediterranean areas. The Working Party on Phytosanitary Regulations decided in June 2011 that a PRA for these species should be performed to assess the likelihood of introduction and establishment, the potential impact and management of these Apriona species for the whole of the EPPO region.

An Expert Working Group met in Paris in 2011-12-06/09 to develop the PRA. The overall conclusion of the PRA was if these pests enter in the PRA area, they may establish, spread and result in economic and environmental damage in the south and south-east of the PRA area. Phytosanitary measures were recommended. The risk of entry (with host plants for planting and wood) was considered moderately likely with a medium uncertainty as detailed data is lacking on the volume and frequency of import of plants for planting, and wood, of host plants.

The probability of establishment is considered as medium. Host plants are widely present in the PRA area, but climatic conditions will restrict establishment. However where climatic conditions are appropriate (in the Mediterranean area, South-East Europe (e.g. Balkans), Northern Turkey, oceanic areas of South-West Europe (in Portugal, France and Spain)), there are also numerous hosts, including in commercial cultivation.

The overall probability of introduction is therefore rated as low to moderate. However, the ratings for entry are partly due to low volumes for all the pathways considered.
The EWG assumed that overall eradication if introduced might be as difficult as for Anoplophora chinensis.

The probability of spread is considered to be "high" as these Apriona species can spread naturally but also with human activities (movement of plants, wood and wood products) because the wood boring habit and cryptic nature of the pest makes detection of infested material difficult.

The conclusions of the EWG (in particular the recommended phytosanitary measures) will be reviewed by the relevant bodies in the EPPO system in 2011-2012. This may then enable a recommendation for regulation to be considered by the EPPO Working Party in June 2012.