1st Meeting of the Panel on Entomology 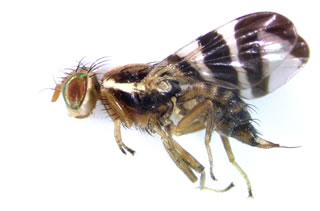 The following new protocols were considered to be ready, following consultation with the author to be presented for final approval: Ceratitis capitata, Ceratitis cosyra, Rhagoletis completa, Paysandisia archon, Sternochetus mangiferae.

The following protocols were considered ready to be sent to EPPO member governments for their critical comments:
The Panel considered that the protocol on Epitrix spp. should be sent for country consultation and that the EPPO Secretariat should ask the Working Party about the possibility for a speeded up process for country consultation by September and to submit this protocol for provisional approval this year.

Work on the following protocols continues:
Work on Tetranychus evansi continues, the Panel agreed that it may be required to change the scope of the protocol and the EPPO Secretariat will discuss this with the author to find out whether it is feasible.

The protocol on Aleurocanthus spiniferus & A. woglumii was discussed relative to the inconsistencies in the descriptions of the number of marginal teeth. It was agreed that a corrigendum for this protocol should be prepared for the EPPO Bulletin to explain that this protocol is under revision. It was also agreed that the revision of this protocol to species level is not possible at the moment as the taxonomy is still under question. The author will be able to provide more information on this by the end of 2011.

PM 7/76 Use of EPPO diagnostic protocols
Various suggestions were made about this standard by a group of nematologists and entomologists and presented at the meeting. These were discussed by the Panel. Some of the points were taken up, and in particular added to the instructions for authors. Other comments will be investigated further at the Panel on Diagnostics and Quality Assurance.

A presentation of the redesigned EPPO Global Database was made. The Database on Diagnostic Expertise was introduced. Other general discussions included a discussion on sequencing and availability of references.

The next Panel meeting is scheduled in 2013.