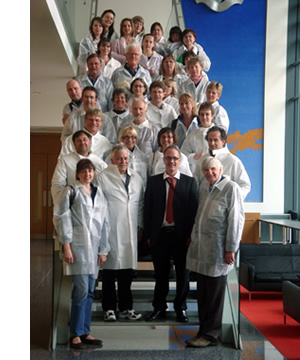 April 2011. The meeting was hosted by the Plant Health Laboratories, Department of Agriculture, Fisheries and Food. There were 33 participants from 17 countries. So far, 23 EPPO Standards on diagnostic protocols for fungi and 7 general standards have been published in series PM 7 (Diagnostic Protocols). The following new or revised protocols were studied during the meeting.

Alternaria gaisen and A. mali

It was agreed that this protocol should be put on hold, awaiting the results of the PhD student working on these pests at the Food and Environment Research Agency (Fera), UK.

Revised drafts of these protocols were provided by the authors, following the e-mail consultation in 2010, and the EMN group reviewed these. The section on sequencing in the protocol on P. kernoviae will be seen by the Panel on Diagnostics and Quality Assurance to ensure that this section is harmonized. The protocol on F. foetens should also be seen by this horizontal panel. It is hoped that these protocols can be sent for country consultation in 2012.

The EMN considered that given the complexity of the genus Colletotrichum, a complete revision of the protocol would be needed and not only the addition of a PCR test. As the pest is not recommended for regulation by EPPO the EMN did not consider it as a priority and recommended that the protocol should be withdrawn.

The addition of a real-time PCR test for this pest was discussed. Due to limited time during the meeting two members of the group offered to research this further and inform the group if they thought this test should be added.

Reports on one of the tests included in this protocol have highlighted the fact that the primers need to be purified and checked for lack of cross reaction. An erratum/corrigendum will be prepared for the EPPO Bulletin explaining this.

This protocol was discussed but as work is still ongoing on the harmonization of pathotypes the revision of this protocol is put on hold.

The next meeting is expected to be in the second week in May (week beginning on the 7th of May, 2012) in Torun (PL), to be confirmed.