The issue of electronic certification has been discussed in several regional and global fora in recent years. At the CPM meeting in 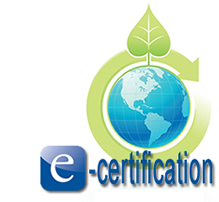 An IPPC Open-Ended Working Group (OEWG) on Electronic Certification was held in Seoul in June 2011. The OEWG has established three working groups to continue this work with the objectives of having a draft e-certification document available by the end of 2011 for testing.  At its last meeting on 2011-06-21/24, the Working Party on Phytosanitary Regulations agreed that an ad hoc Expert Working Group on Electronic certification should be organized to exchange views at the EPPO level before discussion at CPM level, and to elaborate a common EPPO position for the future CPM discussions.

The state of play of e-certification was presented during the EPPO ad hoc EWG meeting, and experts could also present the experience with e-certificates in their respective countries. The possible role of EPPO in harmonizing the information used in the electronic certificates was also discussed and the existing EPPO codes for pest and plant names were presented.

The revised version of ISPM 12 includes a draft Appendix 1 on electronic certification, information on standard XML schemas and exchange mechanisms. The three working groups which have been established during the IPPC OEWG in Seoul are currently working on the harmonization of the XML schema, the different lists of codes, and issues of security and authenticity of transmitted data. Since their proposals will go through the IPPC approval process in order to be already used in pilots in 2012, the EPPO ad hoc Expert Working Group on electronic certification still had the opportunity to make common proposals about the basic elements of e-certification which should be contained in Appendix 1.

The revised version of ISPM 12 also includes a draft Appendix 2 on recommended wording for additional declarations. The EPPO ad hoc EWG agreed that the coding of additional declarations which is already proposed in Appendix 2 was a good basis but that it should be further explored (i.e. a combination of codes and free text, or only a series of codes without text strings).

As several EPPO experts expressed their interest to participate in global discussions on the detailed elements of the 'ePhyto', after confirmation by their NPPOs, their names have been communicated to the coordinators of the three IPPC working groups on:

Presentations made during the meeting