48th Meeting of the Working Party on Phytosanitary Regulations

The 48th meeting of the Working Party on Phytosanitary Regulations took place in Agadir, on 2010-06-15/18 at the kind invitation of the Moroccan NPPO. This EPPO Working Party directs and supervises the technical work of many EPPO Panels related to plant health. The report of the meeting prepared for the EPPO Council and Executive Committee presents in greater detail the discussions, decisions and recommendations which were made by the Working Party; some of the major points are summarized here. 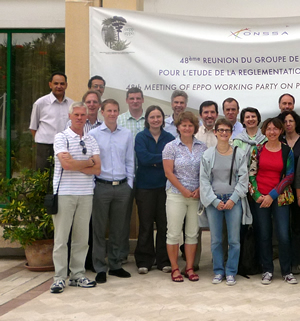 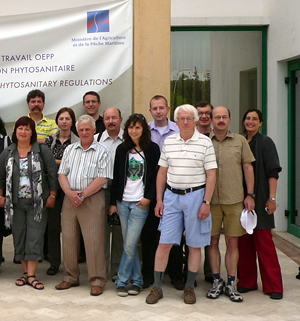 The following EPPO Standards were considered ready to be submitted for approval by Executive Committee and Council in September 2010:

General Phytosanitary Measures (series PM1)
Revision of PM 1/2, by addition of the following pests to the List of pests recommended for regulation:

Rep-PCR tests for identification of pure cultures of bacteria

The Working Party decided to highlight the following A1 pests by putting them on the Action List, as they present an urgent phytosanitary concern:
- Citrus huanglongbing (citrus greening) [Liberibacter africanum, Liberibacter asiaticum, and Liberibacter americanum] and its vectors Diaphorina citri and Trioza erytreae
- Epitrix tuberis, Epitrix cucumeris.

The Working Party was informed about subjects discussed by the Commission for Phytosanitary Measures, the Standards Committee, and the CPM Bureau. It discussed the strategic planning and the reorganization of the IPPC work in relation to the lack of budget.

Following the EPPO Council Colloquium (Angers, FR, 2009-09-24), the Working Party held an in-depth discussion regarding actions to be taken so that plant health systems can better cope with the challenges of increasing international trade of plants and plant products. In particular, the philosophy underpinning most European legislation (‘what is not specifically prohibited can be imported’ versus ‘what is not specifically allowed cannot be imported prior to an evaluation’) was debated. Discussion will continue within EPPO on this topic.

The Working Party reviewed in detail the system established to perform PRAs in the EPPO region and made suggestions for improving the procedure. The Working Party established a list of pests for which PRA should be performed or evaluated in 2010-2011. Expert Working Groups for PRA should be organized for Drosophila suzukii, Agrilus axius, ‘Candidatus Liberibacter psyllaurous’, and Keiferia lycopersicella.

Articles related to eradication campaigns, exchanges of experiences and practical work of NPPOs were suggested for the Bulletin OEPP/EPPO Bulletin.

The Working Party agreed that EPPO needed to structure the feedback on information services and agreed on the creation of the ad hoc Panel on plant protection information.

The Working Party was also presented with the EPPO Global Database, a major reorganization of EPPO data, which will be available in the coming months.

The Working Party approved the Terms of reference of Panel on Diagnostics and Quality assurance (the horizontal Panel resulting from the merge of the Panel on diagnostics, and the ad hoc Panel on technical requirements for laboratories) and of the Panel on entomology.

The Working Party discussed whether some pests (e.g. Frankliniella occidentalis) should be withdrawn from the EPPO Lists as their listing does not seem to be justified any longer. A country consultation will be organized on a list of candidate pests.

The Working Party was informed of all standards being developed by the Organization. In the process of its rapid and continuous improvement, an extended version of the PM 9/1 'Bursaphenlenchus xylophilus and its vectors: procedures for official control', with a section on the situation when there are no wilt symptoms, was presented to the Working Party.