The Workshop was held from 08 to 12 February 2010 in Kiev (UA). It was funded by the FAO Subregional Office for Central & Eastern Europe, or 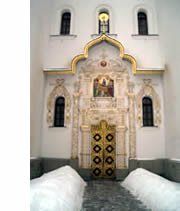 ganized by the EPPO Secretariat with the help of Ukrainian NPPO and conducted in Russian. Mr Nersisyan attended the workshop as FAO organizer, Mr Sosa was the observer from the IPPC, Mr Arnitis (EPPO Chairman, LV) was one of the speakers. Participants from Armenia, Belarus, Georgia, Kyrgyzstan, Moldova, Russia and Ukraine took part in the Workshop. The Workshop was opened by the Vice Minister of Agrarian Policy of Ukraine, and Mr Bilyk, Head of Ukrainian NPPO.

The agenda included presentations on international (IPPC) and regional (EPPO) phytosanitary standards related to import regulations for plants and plant products moving in international trade. First, the ISPM no. 20 Guidelines for a phytosanitary import regulatory system was presented by Mr Orlinski (EPPO Secretariat) with the description of the structure and operation of a phytosanitary import regulatory system and the rights, obligations and responsibilities of NPPOs (National Plant Protection Organizations), which should be considered in establishing, operating and revising the system. This was followed by presentation of ISPM no. 23 Guidelines for inspection by Mr Arnitis with the description of procedures for the inspection of consignments of plants, plant products and other regulated articles at import. The ISPM no. 31 Methodologies for sampling of consignments was presented as a supplement to the ISPM no. 23 by Mr Orlinski. The actions to be taken in the case that import inspection detects non-compliance with import phytosanitary requirements and covered by ISPM no. 13 Guidelines for the notification on non-compliance and emergency action were presented by Ms Necajeva (LT). The phytosanitary regulations for plants and plant products moving in transit covered by ISPM no. 25 Consignments in transitwere presented by Mr Arnitis as well as the most recently adopted ISPM no. 32 Categorization of commodities according to their pest risk, which provides criteria for NPPOs of importing countries on how to categorize commodities according to their pest risk when considering import requirements.

Discussions have been organized after each presentation to allow to participants to ask questions and exchange their views on the implementation of the standards at the national level and their experiences and difficulties. In multiple discussions, participants of the workshop also made several recommendations to EPPO. They highly appreciated the workshop and asked EPPO to publish information on it in English and Russian and distribute it to them. They hoped that this kind of workshops in Russian language would be repeated in future on a regular basis (regular workshops on draft ISPMs, practical workshop on sampling procedures, training on PRA, workshops on the EPPO standards on plant protection products, etc.). Mr Rekhviasvili (Georgia) proposed to organize the practical workshop on sampling procedures in his country in Autumn 2010.

After the presentation on the EPPO Standard PM 1/2(18) “EPPO A1 and A2 Lists of pests recommended for regulation as quarantine pests”, the participants expressed the wish to have similar standards on the EPPO Alert list and Action list.

Participants highly appreciated the efforts of the Ukrainian NPPO to hold the Workshop in Kiev and thanked them for the excellent practical organization.