1st Meeting of the Panel on Diagnostics and Quality Assurance 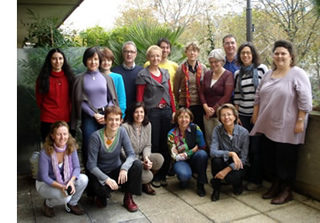 This was the first meeting of the new merged Panel, which replaces the former Panel on Diagnostics and the Panel on Technical Requirements for Laboratories. The meeting was the first Panel meeting to be held in the meeting room in the new EPPO Headquarters. The Panel continued its task of developing diagnostic protocols for regulated pests. Altogether, 100 Diagnostic Protocols including 7 general standards have now been approved and published and about 16 more are in different stages of preparation.

The following protocols were considered ready to be sent to EPPO member governments for their critical comments:
Ceratitis capitata, Ceratitis cosyra, and Rhagoletis completa.

The following protocols were considered to be ready, following consultation with the author to be presented for final approval:

Work on the following protocols continues:
Protocols on Paysandisia archon and Sternochetus mangiferae have been sent for country consultation. If comments are received they will be dealt with by the new Panel on Entomology. The protocol on Tetranychus evansi will be seen at the Entomology Panel.

The protocol on Alternaria gaisen and A. mali and the protocol on Fusarium foetens were discussed and comments made to be presented at the EPPO/European Mycology Network meeting.

The Panel on Diagnostics and Quality Assurance agreed to an e-mail consultation on 2 priority protocols during the year (priority will be decided at subsequent Panels) and is expected to include 2 of the following protocols: Epitrix spp., Spodoptera spp. or Drosophila suzukii.

Validation database
The progress made in collecting validation reports was discussed. It was agreed that a standardised format for summary reports is required and a small group will meet to draft this before the next Panel meeting.

Revision of PM7/98 Specific requirements for laboratories preparing accreditation for a plant pest diagnostic activity
A small working group will prepare a draft questionnaire on the use of this standard  in 2011 to get feedback on its content before the next Panel meeting. The objective is to send this questionnaire in early 2012.

New Standards
The Panel considered that a horizontal standard should be developed on ring-testing and proficiency testing.

Next meeting
The next Panel meeting will be held in Vienna back to back with a workshop for the Heads of Laboratories in the week of the 10th October 2011.