4th Meeting of the Panel on Phytosanitary Treatments

The meeting was held at the Laboratoire des Denrées Stockées (LNDS) (Laboratory for stored products), which is a part of Laboratoire National de la Santé des Végétaux (LNPV), at the INRA site in Villanave d’Ornon, south of Bordeaux.  The facilities and arrangements provided by the Laboratory were excellent, and a new member, Dr Jerome Frtisch (an expert on soil fumigation and soil disinfection) was a welcome addition to the Panel.  The Panel continued its work on the preparation of standards on phytosanitary treatments. These standards describe methods to be followed for performing treatments of commodities moving in trade against quarantine pests and treatments of crops for containment and eradication of regulated pests. 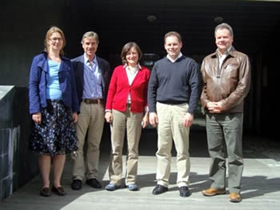 The Panel reviewed seven standards returned by the Working Party on Phytosanitary Regulations after countries’ comments.  Three of these concerned disinfestation treatments for places of production (for Thrips palmi, Bemisia tabaci and Liriomyza sativae). Some countries commented that the treatment programmes (aiming at the eradication of invasive quarantine pests) were not applicable due to the lack of active substances registered.  All pesticides were included on Annex 1 of EU Directive 91/414/EEC, but the Panel decided to add an statement to indicate that active substances available in individual countries will vary, and that a risk assessment will be required for the specific circumstances of the outbreak. The Panel considered that it is important to distinguish between: i) eradication treatment programmes (which are often intensive chemical controls applied successfully in some countries) and ii) treatments which are applied as ‘appropriate treatments’ (sensu EU Plant Health Directive 2000/29/EC) prior to export of plant material.  The standards were revised accordingly.

The Panel also considered five treatment standards that are currently in preparation. Two of these require sulfuryl fluoride (SF) fumigation as an alternative treatment to methyl bromide.  The Panel discussed recent scientific reports that sulfuryl fluoride is a highly potent greenhouse gas, but since there still seems to be some uncertainty regarding the global warming potential of this gas – which has not yet been reviewed by the IPCC – it was agreed to wait for further developments.

The Panel reviewed 15 existing methyl bromide treatments, which despite the unavailability of this fumigant in many EU countries, may still have utility in some EPPO countries (until 2015), as well as for quarantine and pre-shipment treatments in the absence of any other alternatives.  Most of these 15 standards were amended and revised but these methyl bromide treatments will only be published on the EPPO website.

It was suggested to hold the next meeting of the EPPO Panel on Phytosanitary Treatment in York, at Fera, sometime in April 2010.