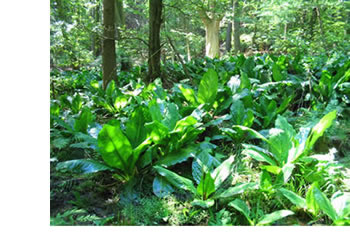 to the EPPO region as an ornamental plant about 110 years ago. It is now found in 11 European countries. The species has been observed to reduce biodiversity in the Taunus region in Germany.

An initial EPPO PRA was performed and approved in 2005. After the proposal to list this species in the Directive 2000/29/EC, the European Food Safety Authority reviewed the initial PRA. The initial PRA is therefore being revised to take into account the EFSA comments and new information that is now available after the initial PRA.

The plant has already entered the EPPO region, it is produced and traded within the European Union and the EPPO region. Imports are recorded as meristem tissue from Indonesia to the Netherlands, and as seeds and plants sold on the Internet, although these volumes remain quite low. The species is already established in at least 11 EPPO countries. Where planted under Northern and Western climates and in wetland habitats, L. americanus is able to establish by producing seeds and reproducing vegetatively. The spread potential of the plant is considered moderate as seeds or parts of the plants usually fall near the parent plants, but can also be spread through water or human activities. The probability of introduction to areas of the EPPO region where it is currently not present is high. Nevertheless, if detected at an early stage, the species can be eradicated.

Considering the wide distribution of L. americanus into the EPPO region (present in at least 11 countries), its relatively small importance for import and trade, its moderate ability to spread, the few stands where impacts to biodiversity are reported, its very restricted habitats, the fact that it has been directly planted in the German site where impacts are reported, it is considered that the species does not qualify as a quarantine pest and the species is proposed for deletion from the EPPO A2 List. Prevention measures at the international level are not considered appropriate, but national actions involving monitoring, communication and eradication are encouraged.

The conclusions of the EWG have been reviewed by different bodies in the EPPO system in 2009 and were presented to the EPPO Council.