13th Meeting of the Panel on Diagnostics

The meeting took place in Rome and the Panel was very privileged to be able to hold their meeting in the most ancient palace in Rome which was built in the 16th Century. The Director, Mr Perini welcomed the Panel and introduced his Institute and gave the participants a tour of the historic library next to the meeting room were the meeting was held and the tower overlooking Rome. 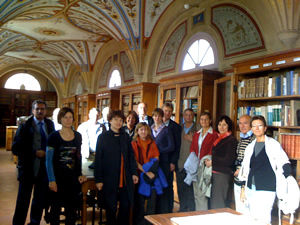 The Panel continued its task of developing diagnostic protocols for regulated pests. Altogether, 98 Diagnostic Protocols and 5 general standards (Use of EPPO diagnostic protocols, Documentation and reporting on a diagnosis, Basic requirements for quality management in plant pest diagnosis laboratories, Immunofluorescence test and Specific requirements for laboratories preparing accreditation for a plant pest diagnostic activity) are already approved/published and about 18 more are in different stages of preparation.

The following protocols were considered ready to be sent to EPPO member governments for their critical comments:
Ceratitis capitata, Ceratitis cosyra, Paysandisia archon and Sternochetus mangiferae.

Work on the following protocols continued:
Synchytrium endobioticum (revision of PM7/28, the Panel reviewed parts of the protocol not relating to pathoype identification – the modification of this part of the protocol is postponed awaiting the results of a ring-test.), Andean potato latent virus and Tomato infectious chlorosis virus. Work on these drafts should continue (for some of them in the specialized Panels).

Protocols to be prepared for the next European Mycology Network meeting:  Alternaria gaisen and A. mali, Fusarium foetens and Phytophthora kernoviae.

The Panel discussed the collection of validation data and the priorities for this. In the first instance the EPPO Secretariat will collect data for tests from laboratories that are accredited under ISO 17025 involving priority pests. Reports can be sent in their original format (and language).